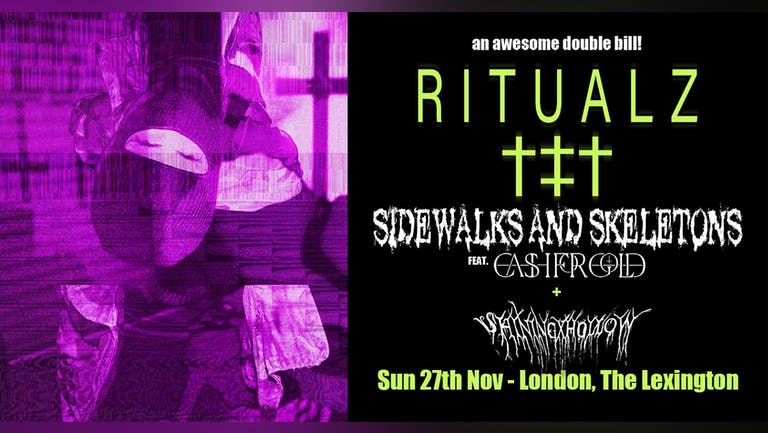 Due to ‘yet another’ double booking by Electrowerkz we have had to rearrange this date to the now following 2 shows!

RITUALZ is the dark electronics project from producer JC Lobo. Started in 2010 in Mexico City, the project gained notoriety during the witch house boom with a sound crafted somewhere between industrial, hip-hop, trance and black metal. With releases on Disaro Records, Mishka NYC, Robot Elephant Records, Artoffact Records, Maligna and appearances on modern goth compilations like Isvolt (Robot Elephant), The Guide to Grave Wave (Mishka NYC) and Occult Box (Cleopatra Records), plus several tours across Europe, Mexico, Canada and the USA, with shows alongside new and established names in dark music, Ritualz immersed himself deeper in the global goth scene culminating in signing to Canada’s Artoffact Records and the release of the album Doom, ranked #13 in I Die: You Die’s list of best albums of 2018. Doom signaled a shift in sound for Ritualz, incorporating elements from EBM and Darkwave to his signature sound. June 2022 will saw the release of a new album called RADICAL MACABRO alongside a list of new remixes made by by various bands like Pictureplane, Sidewalks and skeletons, Dave Parley (ex-Prayers) and many more.

SIDEWALKS AND SKELETONS feat CASHFORGOLD:Music for you to listen to while you walk through cemeteries alone at 3am.

Sidewalks and Skeletons is the solo-project of UK artist Jake Lee, who grew up playing in many different metal bands as a guitarist, as well as gravitating towards creating dark electronic music starting in 2006 and making S&S his main solo project by 2011.
Recently featured in the Devolver Digital video game RUINER Soundtrack - S&S has worked with & played shows with bands such as Crystal Castles, HEALTH, Brothel, Levit∆te and many others. Even being credited as producer for the Crystal Castles track Their Kindness Is Charade.
S&S did 3 USA tours in 2017, 2018 & 2019. Dropped the new album "ENTITY" in 2019. And played shows all across Europe including RUSSIA, Moscow & Saint Petersburg in 2020.

Sidewalks and Skeletons is currently working on a new album, titled "A Neverending Descent", and is dropping new singles along the way such as Cybercrimes, Nowhere, and Eternal Rest.
You won't want to miss what comes next.