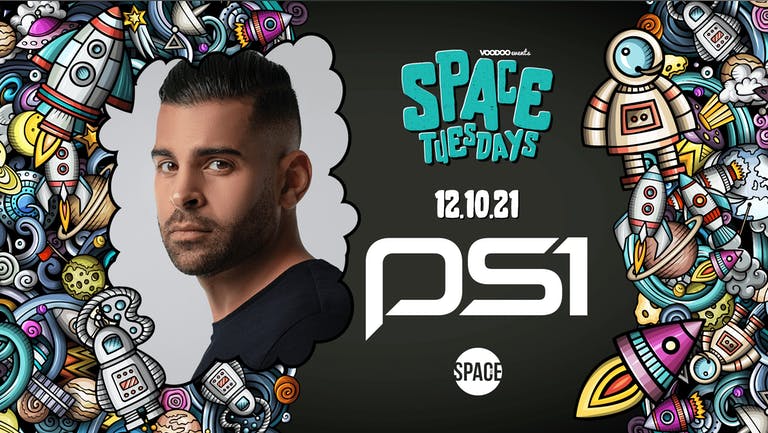 TICKETS ONLY GUARANTEE ADMISSION UNTIL MIDNIGHT!

PS1 has proven to be one of the most in-demand, open format DJs in the United States. Creatively, his inspiration derives from pop culture and film to form an immersive experience. PS1 has a widespread reach to an even broader audience and has been featured in publications such as the New York Times, US Weekly, Page Six and Nylon.

With over 15 years of nightclub experience, and playing upwards of 150 shows a year, his on-the-go work ethic has shown no sign of slowing down.

PS1 has NYC residencies at Tao, marquee and Lavo, as well as Las Vegas residency at Hakkasan, with stops in every major city in between. His style of flipping songs in unexpected ways has caught the attention of a-list celebrities, influencers, as well as internationally recognized brands like Facebook, maxim magazine, pandora radio, among others.

Additionally, his production growth has created a solid portfolio with a signature sound.

PS1 podcast radio quantized radio was released in 2009 uniting the high energy of electronic music into fun, nostalgic party anthems. His unique way of creating music & consistent devotion has further defined ps1 as an artist. From beginning his career in his late teens at NYC top nightclubs to sharing the stage with top DJs David Guetta and Tiesto. This is only the beginning...

Ticket does not guarantee entry to venue, we reserve the right to refuse admission, venue criteria will apply

A fusion of upcoming and established talent each and every Tuesday night. Bringing you your weekly fix of all things House, Dance, Disco and Urban until 5am! Join us in the Underground as we take you on a Tuesday night journey, with special guest DJ's, the biggest tracks and them all important drinks deals