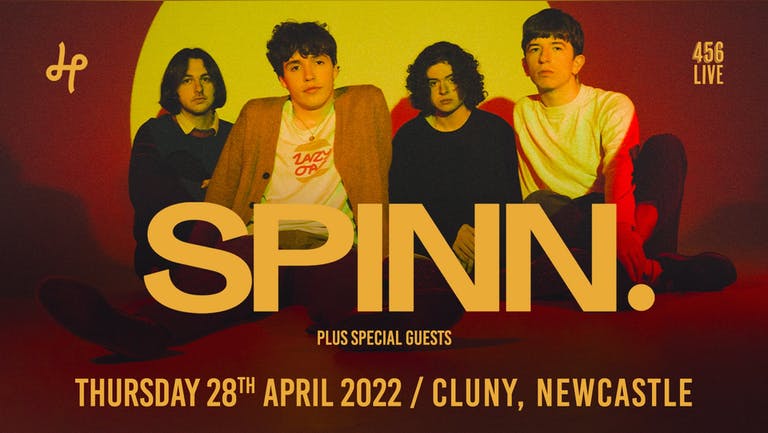 Drawing inspiration from Buddhist teachings and the hopeful attitude of frontman Johnny Quinn, Liverpool-based four-piece SPINN return with their staggering second album 'Outside Of The Blue'. It’s the follow-up to their 2019 self-titled debut, which received lavish praise from the likes of Dork and The Line Of Best Fit, which preceded the band heading out on a sold-out UK tour with slots at Reading & Leeds and Truck followed by their biggest headline show to date in Tokyo.

Packaged with a vibrant visual world created by guitarist Luke Brickett and designer Marnie Cox, the album’s artwork references some of their key external references – books and films. Notably, the album’s most obscure love song, “Stargazing”, draws on the narrative of 2014 horror flick A Girl Walks Home Alone at Night where a reclusive vampire falls for one of the villagers she’s been terrorising.

Produced by Tom Longworth (Oscar Lang, Spector, Vistas and BLOXX) at Parr Street Studios in Liverpool, this time the process felt a lot more relaxed. “It was a lot more fun,” Johnny says, “I think you can tell from listening to the album that there were lots of good vibes in the room.” From backing vocal ad libs, to taking turns on percussion and bassist Sean adding bits of guitar here and there, together with Longworth, the band created a safe, collaborative atmosphere where 'Outside Of The Blue' could really flourish.