This event has already happened! Click here to see upcoming events from DelightAltNight 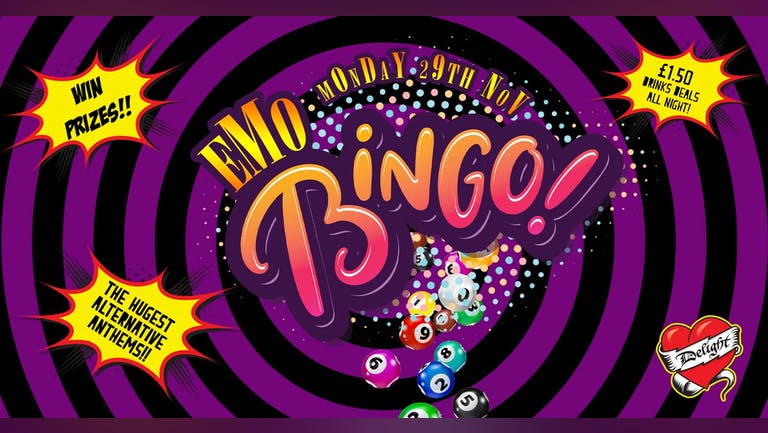 Emo bingo is our awesome spin on traditional bingo where you rock out to your favourite bangers/bops/anthems while playing competitively against the rest of the club for great prizes!

Everyone gets a free Bingo sheet when you arrive, then mark off bands as they are played!

First prize for the first 'full house' of the night. + runners up prizes.

Our expert DJs are here to cherry pick the best alternative anthems and new music to make you bounce and sing-a-long; make sure you arrive early to get in all your requests/suggestions!

WHAT YOU'RE GONNA HEAR
:

Trust our multi award winning DJs to provide the most epic soundtrack to your night!

Delight was devised as the antithesis to the usual commercial clubbing; we have seen some of the best and most memorable nights to ever take place in the city; Welcoming in hundreds of thousands of clubbers over the years, insane theme nights, super star guest DJs and some crazy party times!

As well as the biggest names in alternative music guest DJing we have always been blessed with incredible party-rocking resident DJs; these selectors have played Festival mains stages, sound-tracked the Kerrang awards ceremony, orchestrated mass mosh-pits in festival tents & work on radio including Radio1.

Our multi award winning team of resident selectors are request friendly and experts in contemporary counter-culture.

Monday night Delight is an institution tickling the vivacious underbelly of the alternative scene since 1999!