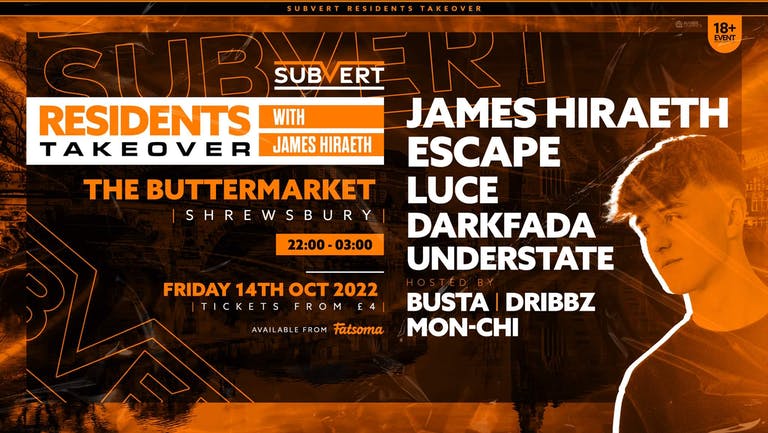 Our resident DJs & MCs are taking over The Buttermarket Cellars for one night only this October! Featuring our very special guest James Hiraeth! 🔥

Tickets from only £4, if you purchase an Early Bird or Standard Release ticket you will also receive an email offering you a £2 discount off any ticket for our November event with Basstripper, OCC Takeover & Sota 👌

Both Subvert and our residents are known for our variety of sub genres, expect a night including Dancefloor, Jump Up, Minimal, Neuro & Rollers over the 5 hours 😈

About our special guest James Hiraeth! 👇

James Hiraeth is a DNB producer & DJ from Wales, he started making house music when he was 12 years old and has switched genre and styles over the years of producing.

James released his debut EP ‘Do You Feel It’ on DNB Allstars’s RAW imprint and has continued to release countless Remixes & Bootlegs, Most popularly known for his bootleg of ‘Baby Girl’ By Disco Lines - Which is now released as an Official Remix via Arista Recordings & Ministry of Sound