This event has already happened! Click here to see upcoming events from The Remedies UK 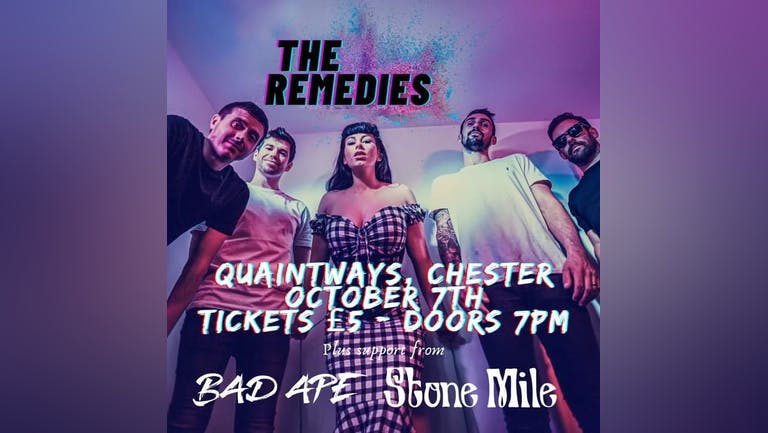 The Remedies are returning to Chester with a headline set at Quaintway's Live. Located at Rosies nightclub on Northgate Street, Quaintways Live has made a strong return to Chesters Live music scene. Hosting Live music through out the summer, it has quickly become one of the city's best new live music venues.

The Remedies are a British rock/pop punk band, hailing from Chester. The band was founded in 2020 by members Andy Stoddart & Tom Walsh. They later recruited long time friend Jay Rogers on drums and added the powerful vocal tones of Bethaney Welling-Davies. In May 2022, they invited Russ Pearson to come in on bass and add a new dimension to the bands live sound.

The alternative pop rockers, famed for their energetic live shows, hard-hitting feel good tracks and catchy melodies have been influenced by bands such as The Clash & Blondie, fused with the modern sounds of Blink-182, Paramore & You Me at 6.

The Remedies spent most of 2021/2022 gigging and building a live profile which has seen them go from support slots at The Live Rooms in Chester to headlining Retro Bar in Manchester and subsequently earning higher profile support slots at Manchester Academy 3. The Remedies have also been invited to play at other noteable venues such as Zanzibar (Liverpool), The Parish & Central Station (Wrexham), The Tivoli (Buckley), Percys Cafe (Whitchurch), Salty Dog (Northwich), Alexanders & Quaintways Live (Chester).