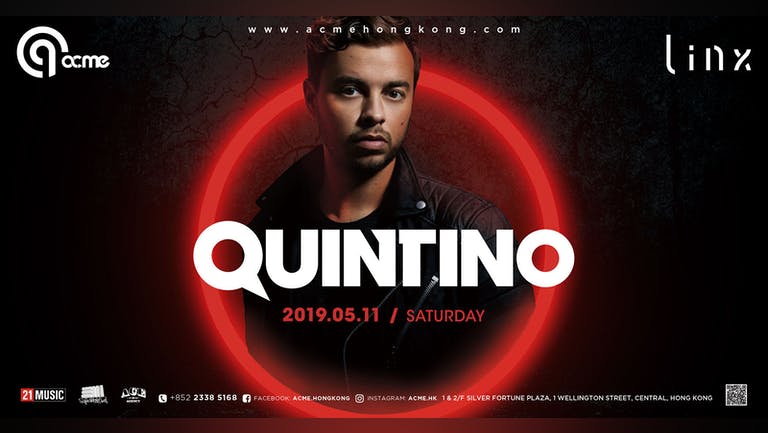 Highly talented Dutch DJ / Producer, Quintino has quickly became one of the leading forces in the global music scene. His high profile work with the likes of Tiësto and Afrojack has made him a household name and his excellent DJ sets across the globe have made his position a highly respected name in the scene.

The Dutchman is now part of a new generation in worldwide electronic dance music, and signs a deal with influential label Spinnin’ Records. He worked with DJs like Tiësto and Alvaro, in particular to release the iconic Ultra Music Festival anthem. With tracks like ‘Go Hard’, ‘Fatality’, ‘Genesis’ and his remix of R3hab & Trevor Guthrie’s hit record ‘Soundwave’ gracing the charts Quintino’s presence within the dance industry is only getting stronger.

Discovered by Laidback Luke at the age of 18, Quintino started to take his stature as a DJ and producer beyond the normal club scene, playing landmark gigs and high profile festivals around the Globe. Highlights include performing at Mansion and LIV in Miami, Pacha in New York, XS in Las Vegas and multiple tours in North America, Europe and Asia.

Quintino has been making headlines around the World, with club bangers including EPIC (which has reached the elite Platinum status), SELECTA with Afrojack, Rap Das Armas (which became a worldwide summer anthem), Heaven, You Can't Deny, We Gonna Rock, among many others.

Quintino's release of ‘Epic’ on Tiësto’s ‘Musical Freedom’ label; The single topped DMC’s Buzzchart, entered the top five of the Beatport Top 100 and hit the #1 position of the Dutch charts. Smashing clubs, ‘Epic’ was quickly added to the record cases of Tiësto and the Swedish House Mafia. The following months, ‘Epic’ remained at the top of the charts, selling enough copies to gain PLATINUM status in the Netherlands.

In between producing and releasing songs, Quintino keeps performing worldwide with an estimate of 250 gigs a year reaffirming many future successes for him.

Over the past few years, French DJ / Producer R-Wan, has cemented his position as a trailblazer in the electronic music industry. From globally successful tracks such as 'What The F*ck' ft. Fatman Scoop and 'Turnt Up' ft. Snoop Dogg, R-Wan has been unstoppable in his efforts to produce quality tracks time and time again. His efforts have seen him awarded Best Open Format DJ in 2013 on DJ List, along with multiple Top 10 positions on Beatport. In 2016, he earned a coveted spot in the Top DJ Mag 2016 list at #121.

Last year, R-Wan released a dance-floor smash collaboration 'High', with DJ Chuckie and a new original collaboration 'Like A Boss' with none others that Big Ali and Lil Jon. He has also released his first ever extended play, 'Noise in My Head'. This EP includes four of R-Wan's latest productions with legends such as Farah Ash, Big Ali, Shockman, and MC Spyder.

R-Wan also continues to play at top-name venues and festivals around the world. His productions have been supported by some of the top selling DJs in the world, such as; Calvin Harris, Afrojack, David Guetta, Hardwell, Dimitri Vegas and Like Mike. With no sign of slowing down, R-Wan continues to evolve his sound and push boundaries, lining up numerous creative projects over the next couple of months, making him one to watch for the future.

Terms and Conditions
- Advance Ticket: $200 including 2 drinks.
- There is a 7% online booking fee charged per ticket sold.
- On purchasing the ticket you agree for your personal details to be provided to the venue for ticketing purposes on the door on the night of the event.
- On purchasing the ticket you agree to subscribe to the venues newsletter.
- This event is only permitted to those over the age of 18.