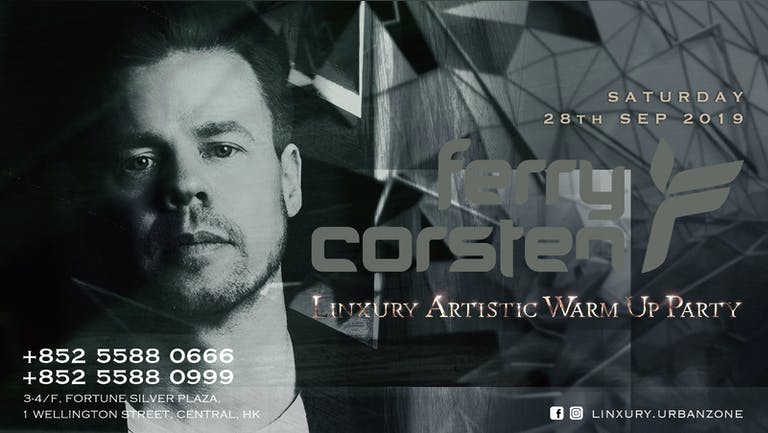 Ferry Corsten is a Dutch DJ, record producer and remixer from Rotterdam. Hailing from Rotterdam, the Netherlands, Ferry Corsten’s lustrous career is exemplified by a passion for music that began as a hobby and spiraled into a full-blown profession. Today, as it was in the beginning, Corsten’s skills lie in his ability to coax the maximum emotional impact from electronic dance music of all genres, not just trance, but also progressive-house and electro. He remains and has always been ahead-of-his time, making music that becomes a template for others to follow.

Corsten has also won his share of industry awards, and consistently appeared near the top of DJ polls worldwide, including his placement in DJ Mag’s Top100DJs 2018, where he rose 15 places and extended his ranking as the longest serving Dutch DJ in the Poll at 8 years, capping what has been an impressive year so far for the Rotterdam native. Ferry Corsten has released a steady flow of new music, and has eight full-length studio albums under his belt, namely: ‘Looking Forward’ as Ferry; ‘Out Of The Blue’ and ‘Together’ as System F; and ‘Right Of Way’, ‘L.E.F.’, ‘Twice In A Blue Moon’, ‘WKND’ and most recently ‘Blueprint’ as Ferry Corsten.

From the outset, Corsten has been a prolific music-maker under numerous different aliases. Those pseudonyms included System F, Moonman and perhaps his most notable one Gouryella (with Tiësto). The latter made a brief cameo appearance with a long-awaited single in ‘Anahera’ – that went on to be one of the standout tracks of 2015 and topped Beatport’s trance chart at the year’s end; even earning a nomination for ‘Best trance track’ in the 2016 edition of the IDMA’s. Drawn in by the love and passion of the fans upon ‘Anahara’’s release, Ferry stepped into 2016 with an idea to breathe life into the well-known sleeping giant.

Terms and Conditions
- Advance Tickets: $250
- There is a 7% online booking fee charged per ticket sold.
- On purchasing the ticket you agree for your personal details to be provided to the venue for ticketing purposes on the door on the night of the event.
- On purchasing the ticket you agree to subscribe to the venues newsletter.
- This event is only permitted to those over the age of 18.