This event has already happened! Click here to see upcoming events from Stand Up in the Basement 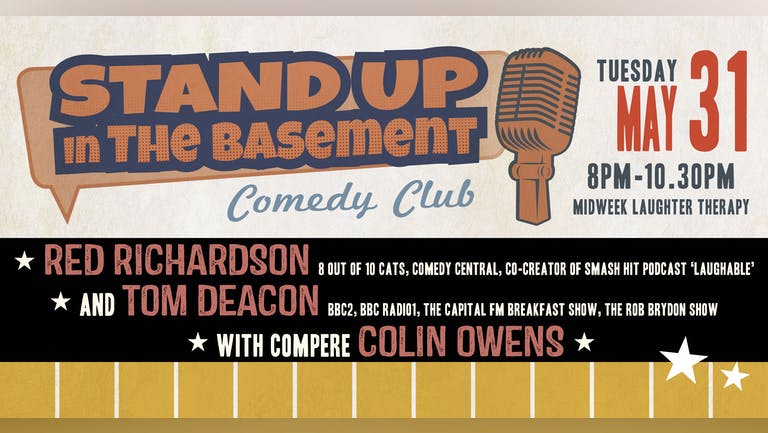 Stand Up in The Basement Comedy

By Stand Up in the Basement

Stand Up in The Basement Comedy

Southampton's favourite comedy night, Stand Up in The Basement promises great-fun, original laughs with award winning comedians and familiar faces from TV; set in the perfect environment for comedy: small, cosy and underground!

Red Richardson is one of the most exciting new stand up comedians on the UK circuit, after appearing in the final of the prestigious ‘So You Think You Are Funny?’ competition, and he has gone on to become a regular fixture in Britains top comedy clubs, where his “Delightfully Sardonic” comedy (Ed Fest Mag) – has been a huge hit with audiences. He has twice appeared on The Stand Up Sketch Show on ITV2, is a regular joke writer for ‘8 out of Ten Cats’, ‘8 out of Ten Cats does Countdown’ and ‘Live at The Comedy Store’ on Comedy Central and has written on Mock The Week... He also co created and co hosted the global smash hit comedy podcast ‘Laughable’ which has charted around the world.

Tom has been performing stand-up for 14+ years – with four Edinburgh solo shows under his belt – and has been the host of his own TV, radio and online shows on BBC2, BBC Radio1, Capital FM breakfast show and YouTube football channel Copa90 – where his Eurofan escapades have notched up over 8 million views. He has made guest appearances on BBC2’s The Rob Brydon Show, Dave’s One Night Stand and ITV2’s Fake Reaction and has performed at The Melbourne Comedy Festival Roadshow in sold-out, 1000-seater theatres. More recently, he is the host of F1 Esports Pro Series drawing a record breaking 30 million views.

"A mighty fine comic" – The Guardian

"With looks, confidence, charm and great material; expect other comics to lynch him" – The Sunday Times

Your compere for the evening, Colin has worked with Jimmy Carr and Russell Brand, as well as working with the team behind The Inbetweeners and Mighty Boosh. 'A comedian who's star should shine brightly' (THE GUARDIAN). He's 'Impossible not to like' (RUSSEL BRAND) with 'Really good material' (THREE WEEKS EDINBURGH).

N.B. Nature of the Beast: Line-ups are subject to change, but quality of talent will never be compromised.

Please note Mango Cocktail Club is an 18+ venue, you must be over 18 to attend this event.

Stand Up in the Basement