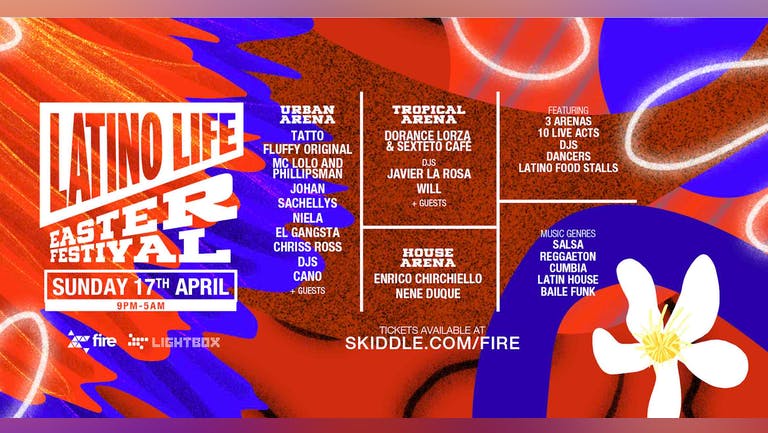 After the success of Latino Life Christmas Fest, we are back in South London mega club complex Fire-Lightbox for another seasonal party and our very first Easter Fest on Sunday 17th April (Bank Holiday). Celebrate Semana Santa Latino style with great live music from early evening followed by a party right through the night with with best Latin DJs till 5am.

Yet again, LatinoLife's trademark live music experience lights up the indoor arenas at Lighbox with Cali’s own multi-award winning Dorance Lorza and Sexteto Cafe, who'll bring his world renowned 'salsa con vibes', direct from the Capital of Salsa to the Tropical Room. Plus DJs Javier La Rosa and Will.

In the Reggaeton Room, some of the most exciting urban Latin acts in the UK: Tatto, MC Lolo & Phillipsman, Fluffy Original, Johan, Sachellys, Niela, El Gangsta, Chriss Ross + Dj Cano and guests, bringing you the best of Reggaeton and Urban Latin beats.

Treat yourself to Latin America’s delicious festive season food before the party starts. Or simply pop in when you can tear yourself away from dancing to re-fuel.

Tickets: £7 from Eventbrite, Fatsoma and Skiddle

More about the artists:

Colombian bandleader Dorance Lorza is also one of the world’s leading salsa vibraphonists, awarded a special honour from the City of Cali for spreading the heritage of ‘salsa con vibes’ abroad. Lorza had an impressive reputation in Colombia as an arranger, composer and producer before arriving in the UK. Since then he’s recorded 5 excellent albums with his Sexteto Café, won his first LUKAS award in 2014, before going on to win more international awards, and a 2018 LUKAS for Best Tropical Album for ‘Tributo a Cali.’ His band

Dominican José Solano (aka T.A.T.T.O) started singing boleros and salsa at 14, sharing stages with his father Daniel Solano. Practicing his voice through performing, he developed a great versatility and began professionally in 2006 in the Dominican Republic with the duo Tatto & El Full. He achieved success with the remix Calabria Pompa Pompa before moving to London.

Born and raised in Cuba, PhilipsMan created one of the islan’s most original hiphop outfits Triangulo Oscuro before arriving in the UK in 2007. Ever since, PhilipsMan and Lolo MC have been rocking dance floors all over London performing their fusion of Cuban and urban music in more than 170 gigs including Glastonbury, Big Chill and in clubs and venues around London.

Born in Venezuela, Fluffy moved to Spain at the age of 4 where he began free-styling on the streets, embracing flamenco sounds, while being trained in opera at school. At 16, Fluffy moved to London where he continued to merge his South American and Spanish sounds with London influences. Self-taught and versatile, Fluffy is able to write and perform music across genres and is one of London’s most prolific and popular Latin Artists.

With his melodic vocals and fire tracks he's been part of in the last year, Jonan is part of the new generation of UK Latin artists and he truly embodies the school Reggaeton sound that we all love! The UK born Colombian singer, although young, works hard and most noticeably performed at the highly attended LatinoLife In The Park, O2 Academy Islington at the Candela Sessions, and LatinoLife Winter Fest in Fire nightclub.

Daniela Riascos C is an up and coming UK-Colombian artist known as “the 420 Queen” or “NieLaa420” whose been making a name for herself on the UK Urban club circuit with her stage charisma . Born into a musical family in a humble home in the heart of Cali, NieLaa started to write her own music in London, incorporating grime in songs such as ‘Perdónenme,’ ‘Te vas a joder’, ‘Ganas’ and ‘Call me’ and ‘Me Dijeron,’