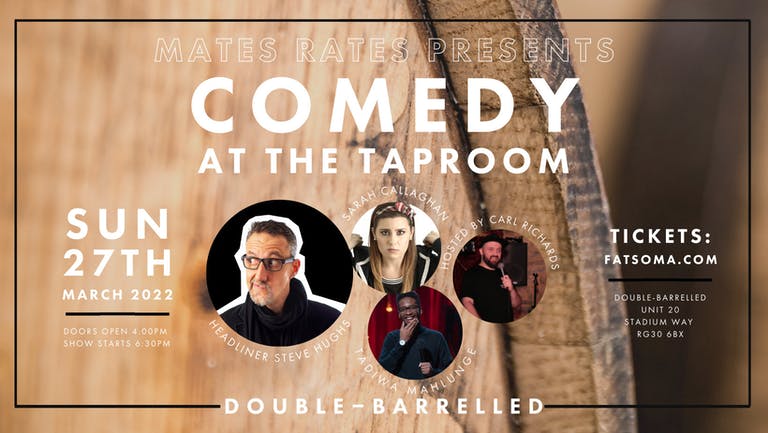 Comedy at The Taproom with Headliner Steve Hughes

Comedy at The Taproom with Headliner Steve Hughes

Stand Up Comedy in Reading is back. Mates Rates Comedy is proud to present Comedy at The Taproom with Headliner Steve Hughes on Sunday 27 March at 6:30pm.

Internationally renowned stand up comedian Steve Hughes is known the world over for his hard hitting, take no prisoners stand up.

The inimitable ex-heavy metal drummer has been burning up the international circuit for the past 20 years, touring throughout Europe, Australia, USA, Canada & New Zealand to rave reviews and mutinous laughter.

Winner - Beat the Frog at The Frog and Bucket February 2021

Finalist - The Blackout at Up The Creek October 2020

Armed with bags of attitude, she’s a refreshing working-class comedy voice…reminiscent of a young Kathy Burke ★★★★ The Herald

Sharp and funny…a young lady-geezer talking funny for an hour. Damn the industry needs more of that ★★★★ The Music, AUS

​Magnificent performance. An absolute natural, Callaghan is definitely one to catch - Fest