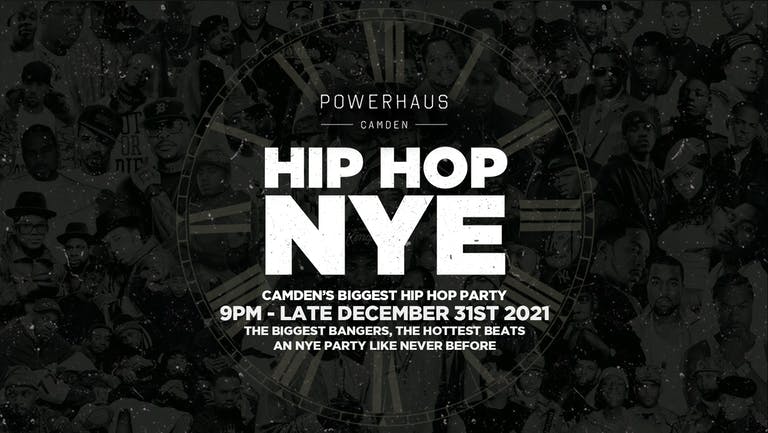 After a huge sold out party in both 2018 and 2019, once again (Now we can finally party on NYE again) we're bringing back the vibes and keeping it simple this festive season by throwing another HUGE New Years Eve party dedicated to HIPHOP (And of course some R&B) 🎉

Why beat around the bush, it's what you all want to hear and we're going to town with it, so come one, come all to the Hip Hop New Years Eve Party 2021! The Biggest in Camden Town! 💃💃

We know that so many places on New Years Eve are a bit ''uptight'' and ''extra'' to say the least so we thought it would be a good idea to throw a party with a bit more of a WILD vibe! Reasonable prices, great location and of course one hell of a party!

No Cheap Thrills, Just good tunes all night long in a huge state of the art venue in the art of London.
Expect Cardi B to TLC, Ja Rule to 50 Cent, Lil Baby to Da Baby, Aitch to Lil Nas, ASAP to Kanye, Chris Brown to Skepta, J Hus to Jay Z and obviously many more.

★ Plus to wash it all down we've got reasonably prices drinks ★ House Party Style Red Cups ★ Midnight Confetti Blasts ★ & Much More...

Your New Years Destination is non other then Camden's freshest venue: PowerHaus! The original Islington venue, first opened its doors in 1989 but has recently been relaunched for 2021 since the closure of the venues second name, Dingwalls. In the past, the benue has been known for holding host to iconic shows such as Blondies debut, Coldplay, Etta James, intimate Foo Fighters performances, R.E.M and George Ezra. Alongside this it was a large part of Camden’s punk boom with The Clash, Sex Pistols and The Ramones regularly appearing. The next stage of this renowned venue’s life will be reopening as PowerHaus, and this will be the first New Years Eve Party in the space!

All customers and staff attending this event will need to provide their
official Covid status using the NHS app, and providing a C*vid Pass. The
pass can be obtained by having two vaccines, a negative lateral flow
test (Taken within 24h of the event) or a positive PCR test result in
the past six months. It can be downloaded from the NHS app and website
and saved onto mobile phones, or saved as a PDF and printed off. The
pass lasts for 30 days, so please be mindfull of this!