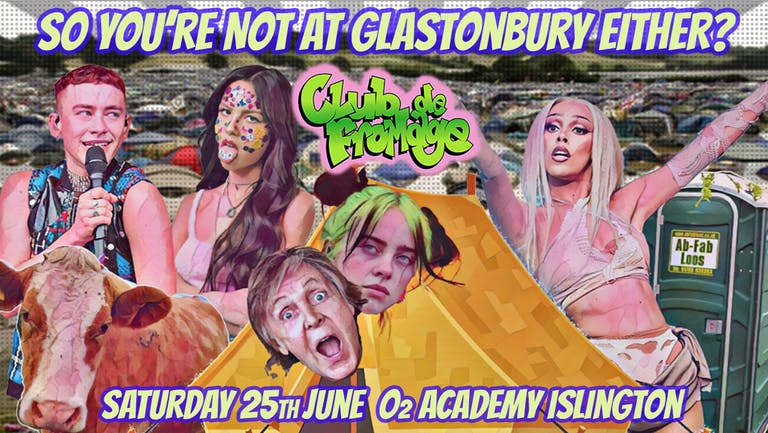 Club de Fromage - So You're Not at Glastonbury? *Tickets go off sale at 9pm- Buy on door after *

Club de Fromage - So You're Not at Glastonbury? *Tickets go off sale at 9pm- Buy on door after *

So, you're not at Glastonbury this weekend then?

Well, who needs a muddy old field, stinky toilets and warm beer anyway? Join Slow Alfie and the crew as they recreate their own little festival instead for a riot of pop, rock, indie, Power ballads, disco and classic r n b and dance from across the decades at the legendary palace of pop, Club de Fromage.

Missing Billie Eilish, Paul McCartney and Kendrick Lamar doing their headline Glastonbury sets? Don't worry we'll be play a few tunes from them plus other acts appearing across the weekend such as Doja Cat, Years & Years, Olivia Rodrigo, Sigrid, Sam Fender and more.

Not to mention the usual pop bangers from the likes of S Club to Madonna, Bon Jovi to Taylor Swift, The Killers to Queen, Whitney to Dolly, Beyonce to Gloria Gaynor, Ariana Grande to Prince, we'll throw in all sorts to keep this home made festival jumping!

and loads more stuff they could only dream of having at Glastonbury.