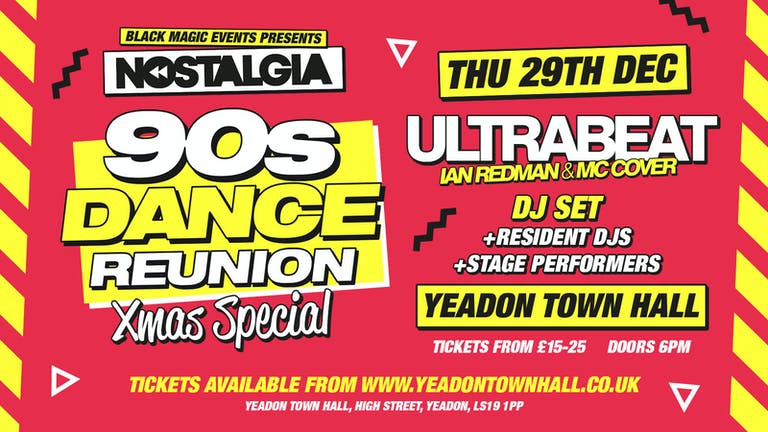 Thankyou for all the support for our last event... it WENT OFF!!

Due to demand, Yeadon Town Hall have gifted us one more date for 2022!

Safe to say its a Xmas Special this one, Thursday 29th December. Not the usual Saturday date but lets be honest, most of us won't be working that Friday and what a good excuse to have a party!

Only a select few in the music industry have become a master of a genre they represent. Ian Redman is one of those gifted few. Rising to earn his place on music the wall of fame in the Dance scene from the early years of the last decade,

Ian Redman has been a household name in numerous countries ever since the Number 2 hit - Ultrabeat's "Pretty Green Eyes". From there, he continued to work alongside Mick Di Scala and Chris Henry to become the foundation of the UK's Dance music export machine.

Producing a number of follow up UK top 40 chart hits such as "Feelin' Fine" , "Better than Life" and "Elysium (I Go Crazy)". Finally, after their huge success in the charts along with unprecedented response from a world tour, they had built a stellar back catalogue of work. Enough to release their first album "Ultrabeat - The Album" which went straight to number 8 in the UK album charts.

Giving the masses 110% of his energy from start to finish.

We are limiting tickets again so that everyone has space and seated table areas to party from, or hit the dancefloor, the choice is yours!