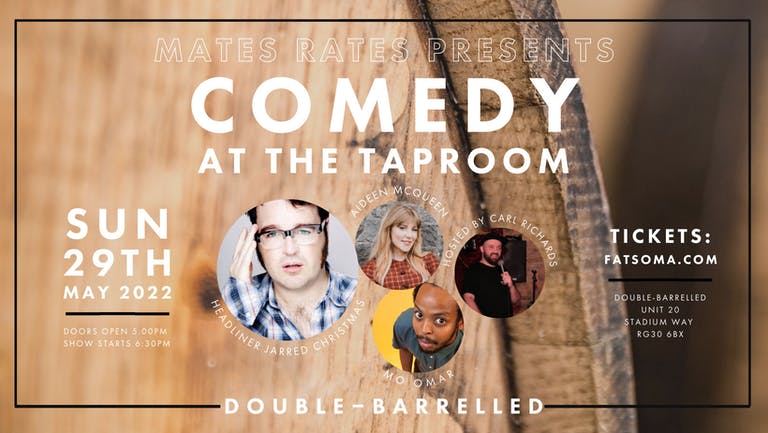 Comedy at The Taproom with Headliner Jarred Christmas

Comedy at The Taproom with Headliner Jarred Christmas

Stand Up Comedy in Reading is back. Mates Rates Comedy is proud to present Comedy at The Taproom with Headliner Jarred Christmas on Sunday 29 May at 6:30pm.

New Zealand Sensation Jarred Christmas is one of the most innovative and exciting stand-ups on the UK circuit. A sought-after headliner famed for his quick-witted spontaneity, masterful skills of improvisation and energetic storytelling; Jarred is a regular at the Edinburgh Festival, and at comedy clubs and International festivals around the globe.

He is a regular team member at The Comedy Store’s weekly topical show The Cutting Edge and was recently named Best Compere at the 2016 Chortle Awards; scooping the title for the second time.

Somali-born, Cardiff-raised and London Based, Mo Omar is a fast-rising talent with a unique perspective.

Mo was selected to perform in The Pleasance Comedy Reserve show at the Edinburgh Festival Fringe and was a finalist of the BBC Introducing Radio 4 Comedy Award, both in 2019. He went on to make his TV debut shortly after, appearing on Harry Hill’s Clubnite on Channel 4.

Aideen McQueen is one of the brightest sparks in the new generation of Irish comics. She’s sassy, sexy, saucy and side-splittingly funny.