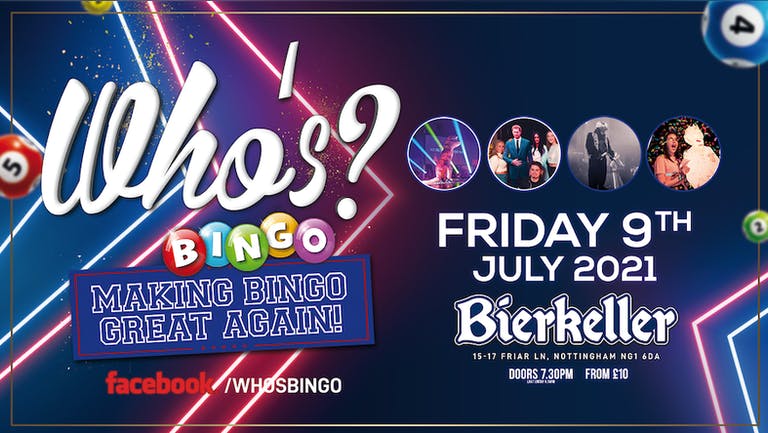 This Friday Bonkerz Bingo are partnering up with Who's? Bingo in Nottingham with the same host Adam Who and Nigella the Gorilla

Bingo is about to get proper naughty & fk'd up!!

This event will be going ahead socially distanced on Friday 9th July.

What the hell is Who’s? Bingo??
It’s similar to normal Bingo but less $hit and very controversial 💁🏻 Adam Who’s? known for creating some of the craziest boat parties in the Mediterranean and has now created his own take on bingo. With a very open demographic of people who attend from students to grandmas it’s a night of up on the bench singalongs to controversial shenanigans. It’s a night of unimaginable fun, full of throwback classics to modern bangers it’s a great way to escape and have a massive party.
All tickets include free entry to the after party at ICON.
🏆 Expect the ridiculous from overnight stay in Blackpool at a swingers hotel or maybe you might get your hands on a huge adult toy. This isn't the kind of bingo you necessarily want to win!

There will be no tickets available on the door, the only way to get in is buying a ticket in advance. Tables will be allocated on a first come first served basis in the downstairs only. We advise coming early in your group if you would like to get a table at the front.