This event has already happened! Click here to see upcoming events from pieradio 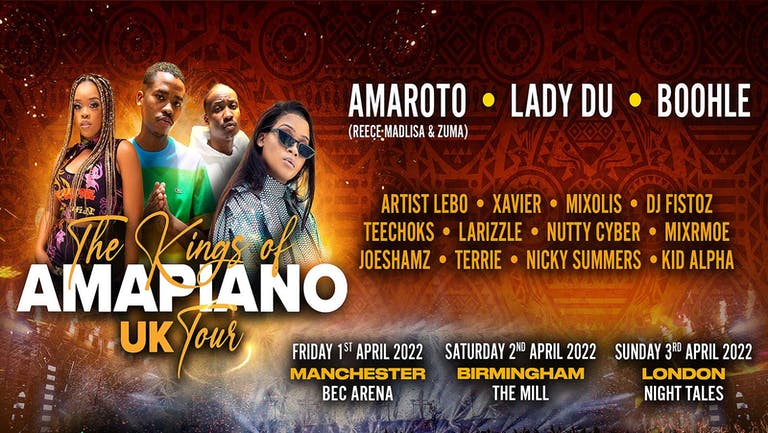 Lady Du: With a career dating back to the early 2000s, singer, rapper, and DJ Lady Du found international success after refining her sound to become a leading figure in amapiano, which exploded as a worldwide phenomenon at the dawn of the 2020s. Hailing from a musical family (which includes her father, DJ Choc, and uncle, DJ Zan D), Lady Du naturally gravitated toward DJing as a child, and went on to win national competitions. Though she was initially known for house music, Lady Du now works alongside some of the biggest names in amapiano (including DJ Maphorisa and Kabza De Small) and has produced hits like “Umsebenzi Wethu” alongside Busta 929, Mpura, Reece Madlisa, Mr JazziQ, and Zuma. Her rich vocals and commanding rasp are an ideal fit for amapiano’s subdued, synth-heavy grooves.

Boohle: Is a key voice in amapiano, using her soulful vocals to breathe life into countless hits by pioneers of the genre like Josiah De Disciple, Mr JazziQ, Semi Tee, and hip-hop superstar Cassper Nyovest. Born Buhle Manyathi in 1998 in the township of Vosloorus in South Africa’s Gauteng province, where amapiano originated, Boohle dabbled in choral music, Afro-house, gqom, and even gospel. After matriculating in 2016, the singer found her breakthrough with her 2020 debut EP, Izibongo. The project showcases the singer’s sharp vocal and writing abilities as she explores relationships, spirituality, and the pursuit of success, backed by Afro-pop, Afro-soul, Afrobeats, and amapiano production. But it’s her equally fluid debut album, Umbuso Wabam’nyama—released in 2020 in collaboration with amapiano mainstay Josiah De Disciple—that made Boohle a household name, thanks to heartfelt earworms like “Mama” and “Inyembezi.