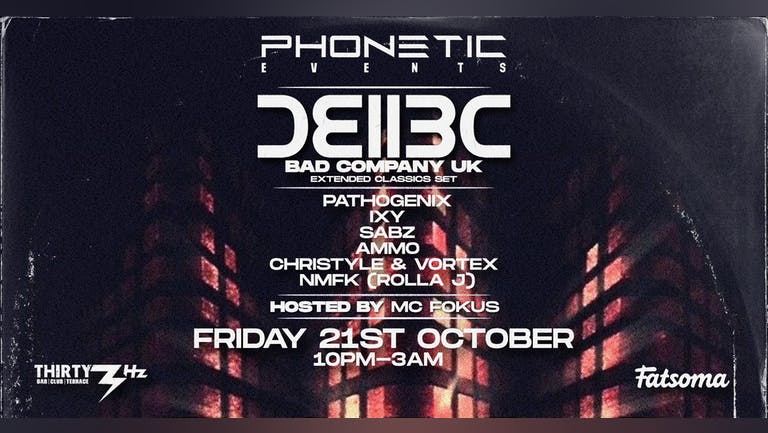 This October, Phonetic Events bring the legends of DnB scene to Thirty3hz in Guildford.

Formed in 1998 as "Bad Company" from the ashes of Renegade Hardware acts Future Forces Inc (dBridge and Maldini) and Absolute Zero (DJ Fresh), although they had also worked together in various configurations: Stein, White and Maldini released The Code as Absolute Zero & Subphonics on Renegade Hardware; Stein and Wojcicki released Otto's Way as Fresh & Vegas on Metro Recordings. In April 2018, the group announced their first album in 16 years, Ice Station Zero, which was released at May 11, via Ram Recordings.

The group is known in the drum and bass industry for their 12" single, "The Nine" / "The Bridge" (BCR001), which was later remastered and released again as "The Nine (Remastered)" in 2014. Bad Company went on to produce four albums and various singles which were acclaimed with similar success.

This is a great opportunity to catch Bad Company UK in an intimate environment.

The Venue
Thirty3hz is fully loaded with a Funktion-One sound system.
Impressive light show with a state of the art light wall.
Quirky upstairs smoking terrace with soundsystem and bar.
Cocktails, spirits and beers.
18+ event ID will be checked on entry.
No refunds unless event is cancelled.
Last entry 2am with limited tickets on the door.