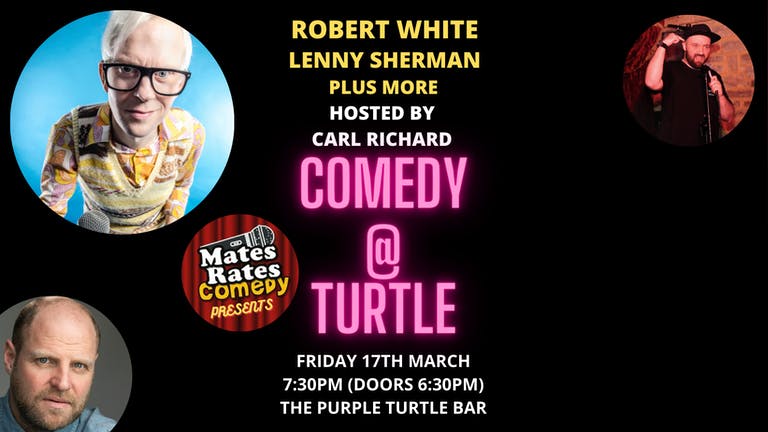 Stand Up Comedy in Reading is back. Mates Rates Comedy is proud to present Comedy at Turtle with Headliner Robert White.

Please be advised that you will need id to get into The Purple Turtle.

Robert worked his way up the stand-up scene, starting in 2004 and found early success as a finalist in the prestigious Hackney Empire competition 2006, he has gone from strength to strength and in 2010 won the Malcolm Hardee main award at the Edinburgh Festival. He now is a sought after act who regularly performs in big clubs, little clubs, those in-between, theatres and festivals around the UK and abroad, after gaining 2nd Place Britain’s Got Talent – 2018. He divides his time between comedy in gigs, tours and whatever else comes up, writing; songs & musicals and talking to people about autism and he is available in each of these areas.

‘Just one of the funniest performers I’ve ever seen, I’ve never laughed like that !’  David Walliams

‘He may sound like a niche act, but the musical comedian has managed to garner a wide appeal with his chaotic style and improvised musical skills.’ The Sun

‘ … souped-up risqué keyboard-based songs, waspish asides and neurotically charged camperie from a hyperactive man-child who is among the most original of this year’s Fringe…. Superb’ Telegraph

“surprisingly original, and funny…. exactly the sort of act who should win Britain’s Got Talent.” The Daily Mail

One of the sharpest satirical comedians on the circuit, Lenny is immensely popular with acts and punters alike. His cheeky Cockney manner allows him to get away with far more edgy stuff than most acts would dare attempt, yet it still all comes across s friendly and (most importantly) very funny.