This event has already happened! Click here to see upcoming events from Pickled Productions and Events 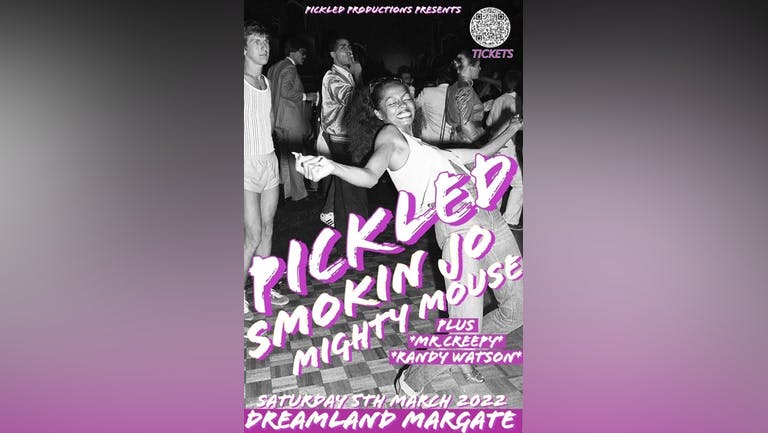 By Pickled Productions and Events

Pickled’, Margate welcome Smokin Jo, one of the most talented DJ’s to emerge from the British dance music scene, her undeniably cutting edge sound has carved her a niche in clubland. Jo has had a truly successful career and over her 29 years behind the decks she has played in pretty much every corner of the globe and in every major nightclub you could care to mention: Space (Ibiza and Miami),Fabric (London) Womb and Aghea(Tokyo), Panorama Bar (Berlin), Warung (Brazil), Cavo Paradiso (Mykonos), Pacha, Crobar and Vinyl (New York), Zouk (Singapore), and Cocoon (Frankfurt,) are just some of the venues she has played in recent years. Jo prefers, soulful sounding tracks that take you on a journey, no matter what style she plays from Techno to House it has to have meaningand a bass line to kill.

Also Joining on the night will be Mighty Mouse, who has been carving out his own path making innovative disco and house music whilst cementing his reputation as a truly international DJ. 2019 was his breakout year following the release of his critically acclaimed anthem, ‘The Spirit’. a former ‘Hottest Record In The World’ on Annie Mac’s BBC Radio 1 show. Craig Charles quoted on his BBC Radio 6 show that the Mighty Mouse edit of Double Exposure is ‘one of the best of the year’ and edit legend Greg Wilson put the Mighty Mouse edit of Controversy by Prince as his number 2 edit of the year.

Mr Creepy has supported the likes of Calvin Harris, Zane Lowe, Dizzy Rascal and in the recent years touring with the famous ska band, "The Dualers” and DJ’ing at SLAMusic and The Vinyl Countdown playing various sub genres of music including nu-disco, jackin & deep house.

Randy Watson is co-founder of ‘Pickled’ alongside partner in crime Katie. His love of all things house music started in the early 90’s when at the age of 16 he went on holiday with friends to Ibiza. Playing disco fuelled reworks and edits, mixed with jackin house beats and soulful breaks, its all about the musical journey.