This event has already happened! Click here to see upcoming events from Hellfire 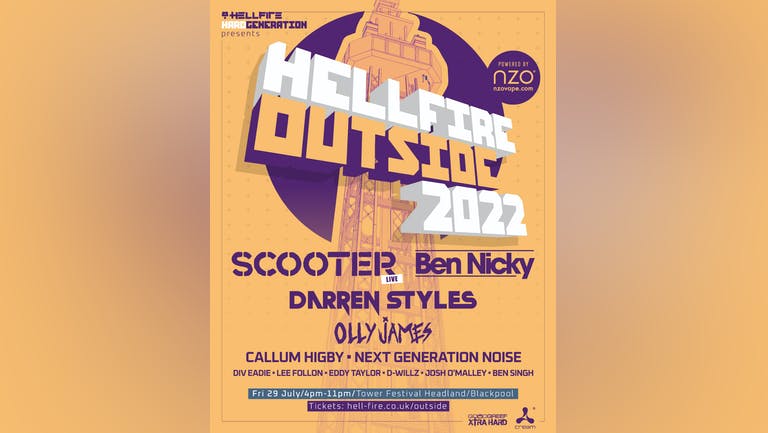 Following on from the most recent success of Hellfire at Manchester’s O2 Victoria Warehouse in February, Hellfire are excited to announce they are returning for Summer 2022…. And this time it’s OUTSIDE.

Heading over to the 10,000 capacity Blackpool Tower Festival Headland on Friday 29th July for their first ever outdoor show, the summer daytime party is set to take the event brand  to new heights and give fans a different set and scenery for the popular event series.

First up in the lineup for Hellfire's exciting new festival is SCOOTER , who have spent more than 500 weeks in the singles charts and 300 weeks in the album charts, selling over 30 million units along the way. More than 100 gold and platinum records from all over the world. On top they scored more top ten hits in the charts than any other German band and can call on a catalogue of top ten tracks to rival those of the most successful artists of all time, names like Madonna, Michael Jackson, Rihanna or Depeche Mode!

Next up is the record-breaking star Ben Nicky who catapulted himself into the limelight to transcend well beyond his genre, tattooing his mark on the scene and outselling his peers to become one of the most sought-after globe trotting artists and online celebrities, with his social media interaction and viral videos second to none!

Bringing the Harder style of electronic music to the crowd, Darren Styles, who is one of the genres biggest trailblazers and undoubtedly one of the world’s most influential DJs, will be taking to the decks at the Blackpool event. Having been at the forefront of hard dance and electronic music for over 25 years, he remains a formidable force across the globe that has been instrumental in helping the hardcore sound crossover to the mainstream.  His electrifying DJ sets and productions have garnered him a global fanbase and seen him perform at many of the world’s leading electronic music festivals over the years including Creamfields, Tomorrowland and EDC Las Vegas where he was the first UK Hardcore artist to perform at the world-renowned festival.

With performances from Calum Higby and Next Generation Noise, fans of the harder style of music are in for a white-knuckle musical ride on 29th July at the first ever Hellfire Outside Festival.

Presale tickets go on sale 9am Thursday 3rd March 2022 and start from £32.50, fans must sign up at hell-fire.co.uk to access this exclusive presale. General sale begins 9am Friday 4th March 2022. We advise fans to  sign up for the best possible chance of securing tickets.