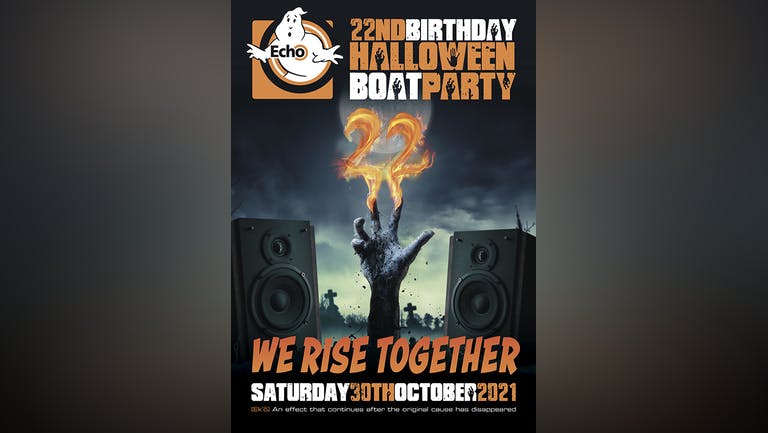 After a 2 year hiatus Echo will return and we've got something special for you! Echo's comeback event will be a combined 22nd birthday and Halloween boat party, featuring 2 big sound systems, 17 DJs and performers, a live performance, a live DJ set, and a classics set in each room. Once again, we'll be able to get out on the river with the iconic London skyline as a backdrop, enjoy some spine-tingling music and party together. We can raise a glass together. We can dance together.  We Rise Together.

Echo boat parties are known for their welcoming atmosphere and our Halloween boats have been the ultimate memory maker of them all. There's nothing better than being out on the Thames, watching the sun set over the London skyline and then seeing the riverbank come alive with light as twilight fades... while a beautiful soundtrack reaches out to call you to the dance-floor.

Echo: The Soundtrack of the Thames since 1999

Echo is not advertised at all and has been built up solely by word of mouth recommendations and social networking. If you've heard about us, it was almost certainly by a friend of yours telling you what a great time they'd had. Our boat parties are an entirely different experience to club venues, with a unique atmosphere. This is something we have been carefully cultivating at Echo for the last 22 years - and we think you'll love the result.