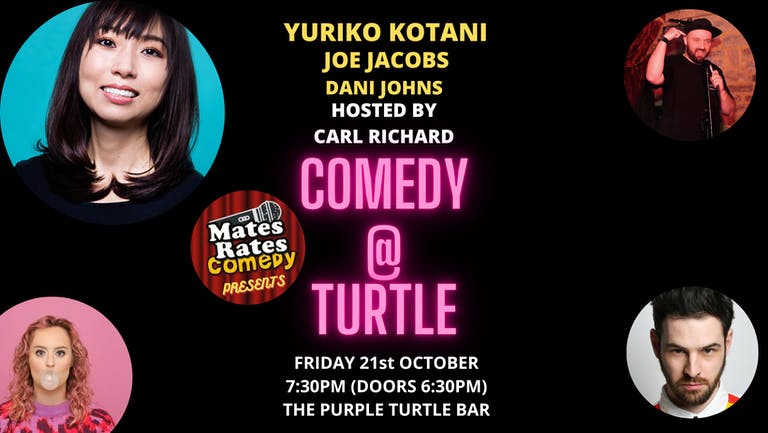 Stand Up Comedy in Reading is back. Mates Rates Comedy is proud to present Comedy at Turtle with Headliner Yuriko Kotani.

Yuriko began performing stand-up in 2014. she was named as "One To Watch" by Time Out and won the BBC New Comedy Award in 2015.

She also worked with the Foreign & Commonwealth Office to make videos for Rugby World Cup 2019, detailing her top tips for fans travelling to Japan.

On the live circuit, he’s a regular at The Comedy Store, Top Secret, Glee, Up The Creek, Backyard Comedy Club, Covent Garden Comedy Club, Knock2Bag, Downstairs At The Kings Head, Banana Cabaret, The Distraction Club and many others.

He has provided tour support for acts such as Jamali Maddix, Dane Baptiste and even opened for Bill Burr at The Comedy Store in Hollywood.

“The Stormzy of Stand up” — Chortle

“Always funny” — Beyond The Joke

Born and bred Bristolian Dani Johns is described as a "smart, clever pocket rocket of a comedian" whose "sassy delivery captivates every audience member".

Dani is an instantly likable act with an impressive and increasing list of accolades (including BBC New Comedy Award, Funny Women Stage Award & Komedia New Act of the Year Award).