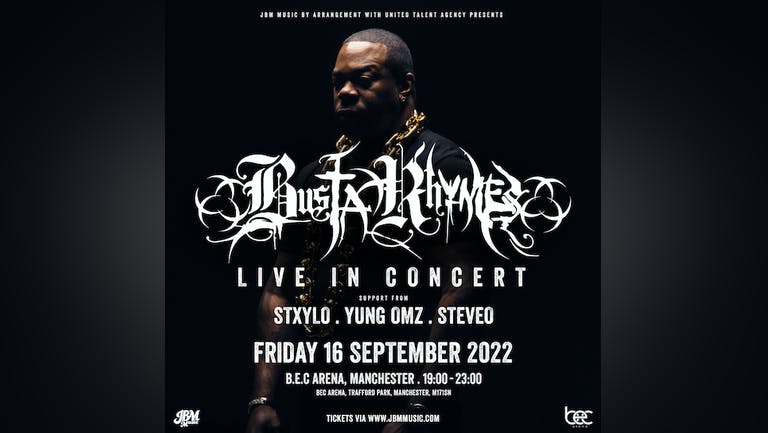 We’re bringing Busta from across the pond to hit up Manchester’s BEC Arena live in concert on Friday 16 September 2022. Get ready for a night of pure Busta nostalgia chopped up with fresh tunes from the rap legend himself. Brooklyn’s own Busta Rhymes hails from rap’s golden area, known for his ragga-inspired style, laced with complexity and humour. Busta began his rap career in 1996 with his hit single Woo-Hah!! Got you all in Check and went on to define the scene in the 90s and 2000s, regularly topping the US charts and featuring regularly in the UK charts.

Busta’s 1997 album When Disaster Strikes kick-started his solo rap career and is full of the high energy, gritty, and choppy style he became known for. He went on to feature on A Tribe Called Quest’s tune Scenario which is where he broke out on his own and towards the end of the decade parted ways with Flipmode Squad. This didn’t slow down Busta’s drive and determination for the scene. Busta went on to release albums throughout the 2000s such as Genesis (2001), It Aint Safe No More… (2002), and the heavy-hitting The Big Bang (2006).

The Big Bang skyrocketed Busta to number 1 in the US charts, selling over 209,000 copies, and is arguably one of his finest creations. Busta went on to release Back On My B.S. in 2009 and Year Of The Dragon in 2012. His latest Album launched in 2020, Extinction Level Event 2: The Wrath of God, received rave reviews and was the culmination of 6 years of dedication, featuring collaborations with Mary J Blige, Kendrick Lamar, Rick Ross, and Mariah Carey to name a few. As well as being a highly successful artist and producer, Busta has featured in numerous films and TV shows throughout his career. One word - unstoppable.

We can’t wait to have you join us for what is guaranteed to be an immense show in Manchester’s BEC Arena on 16 September 2022.