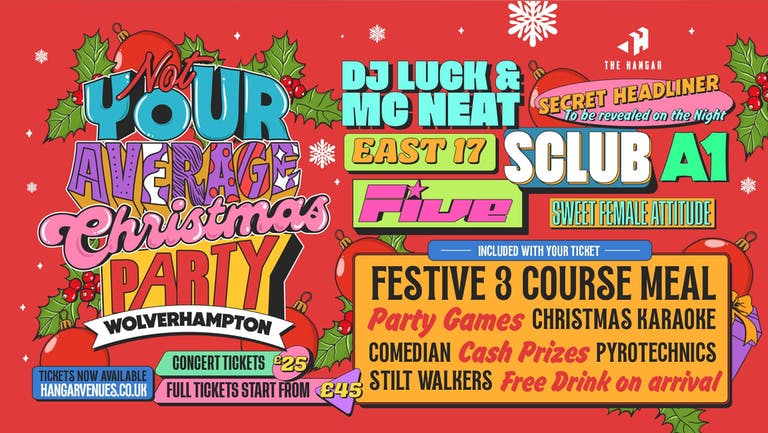 NOT YOUR AVERAGE CHRISTMAS PARTY - WOLVERHAMPTON

NOT YOUR AVERAGE CHRISTMAS PARTY - WOLVERHAMPTON

Are you bored of the same old Christmas party? Well look no further… “NOT YOUR AVERAGE CHRISTMAS PARTY” is coming to Wolverhampton! 🎅🏼 🎉🎄

On Friday 10th December we have a Festive Treat in store for you that’s has never been seen before in the Midlands! The Hangar presents a night you will never forget including brilliant live performances from some of the biggest names from the 90s’ and Naughties


2ND HEADLINE ACT:  The Legendary 'S-CLUB'  performing the hit songs 'Bring it all Back', 'Dont Stop Movin', 'Have you Ever', 'Never had a dream come true' and 'Reach'!

4TH HEADLINE ACT - Another huge 90s boy band A1 has been added to the lineup performing live 'Like a rose', 'Caught in the middle', 'Everytime' and much more

6TH HEADLINE ACT -  One of the biggest names in old school garage ‘DJ Luck and MC Neat’ will be closing the night playing some of their hit songs - ‘A little Bit of Luck’, ‘Masterblaster’ and “Aint no stopping us’ to be announced on the night!!!

7th Headline Act - This will be announced on the night!!!

Featuring DJs, Party Games, Comedians, a Fire Show, Stilt Walkers, Christmas Karaoke, Cash Prizes and much more. This is the kind of event that makes you want to tell everyone, ‘I was there.’ Whether you’re looking for a workplace Christmas party venue or a get together with friends and family over the festive period, Not Your Average Christmas Party is the ideal choice.

If you just wish to come for the concert to see all of the artists performing 'Concert ticket only' are now available for only £25 - Entry begins at 9.30pm for this.