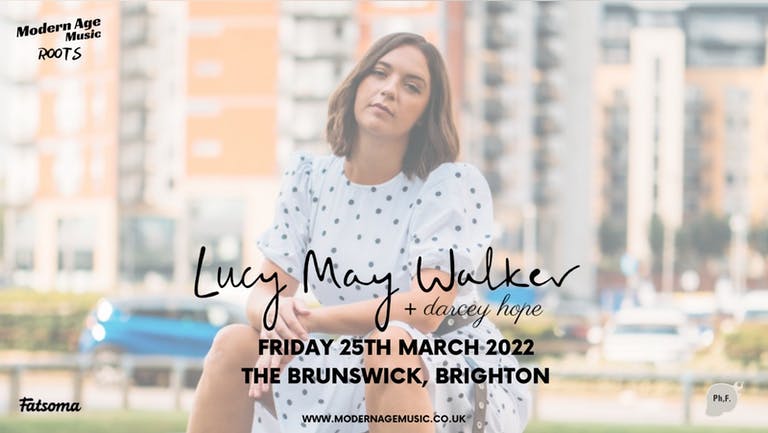 Lucy May Walker live at The Brunswick + Darcey Hope

Lucy May Walker live at The Brunswick + Darcey Hope

Lucy May Walker live at The Brunswick, Brighton  + Darcey Hope

Lucy May Walker is a folk-pop Singer/Songwriter originally from Worcestershire, now living in London. She has enjoyed numerous spotlights on national radio including plays on BBC Radio 2. Her debut EP, Heartbreak Songs, received national attention after a chance meeting with BBC Radio 2 host Jeremy Vine.

The host spotted her busking in London and invited her to play two original songs live on his show in October 2018. Vine described Lucy as “just brilliant” on a show listened to by more than 7 million people. The EP reached No. 3 on the iTunes Singer/Songwriter chart, receiving numerous plays on BBC Introducing across the Midlands.

She has since received more plays on BBC Radio2 from Jo Whiley and featured on BBC Radio5, playing live for Scott Mills and Jamie Cullum. She made her first national TV appearance in December 2019 on the Jeremy Vine On 5 show playing her single Safety Net, a song which now has more than 500k listens on Spotify.

Lucy made her first TV appearance with a performance of the song on
Jeremy Vine on 5 in December 2019.In June 2020 after a successful Kickstarter campaign, she released her new EP Bad Day, with the title track now streamed over 100k times. The crowd-funding campaign reached its target after just two days, showing the desire of Lucy’s fans for more music.

Lucy May has sold out headline shows across the UK and has supported the
likes of Wet Wet Wet, The Dunwells, Lucy Spraggan and Hue and Cry. She has also played at festivals including Isle of Wight and The Big Festival.