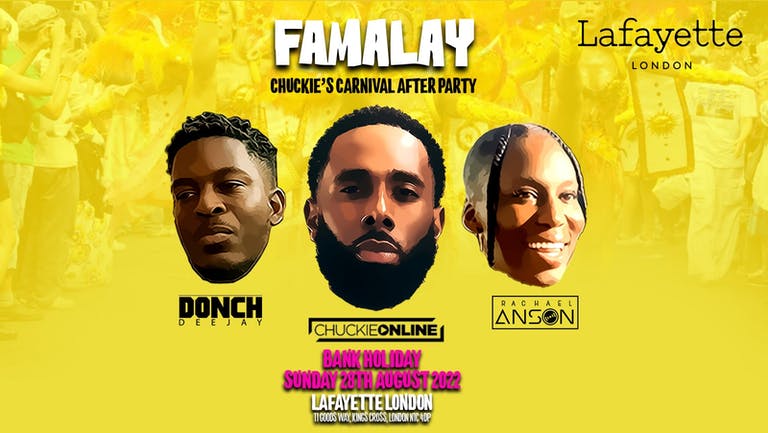 So he's ready for Notting Hill Carnival to return to the streets of London this year.... he'll be there walking up and down the parade route, taking in the floats & sound systems, the food (and rum), and just enjoying and taking in the overall beauty of the carnival vibe..... BUT he also wants to take the opportunity to celebrate Carnival with his FAMALAY!

So Chuckie has decided to throw a small intimate, very last minute party for all his friends, followers, fans, whatever you want to call it, cos he calls them his FAMALAY, just to celebrate the beautiful return of Notting Hill Carnival on Carnival Bank Holiday Sunday 28th August at one of London's coolest live music venues LAFAYETTE in Coals Yard close to St Pancras and Kings Cross Statiosn (so a stones throw away from Carnival when 'FAMALAY' day is done on Sunday night)

CHUCKIE will be joined by Donch & Rachael Anson on the decks, and expect everything from Dancehall, to RNB & hip hop, and everything in between to celebrate the biggest street festival in Europe!!!

Tickets are very limited so once these tickets are gone there will not be any more released!