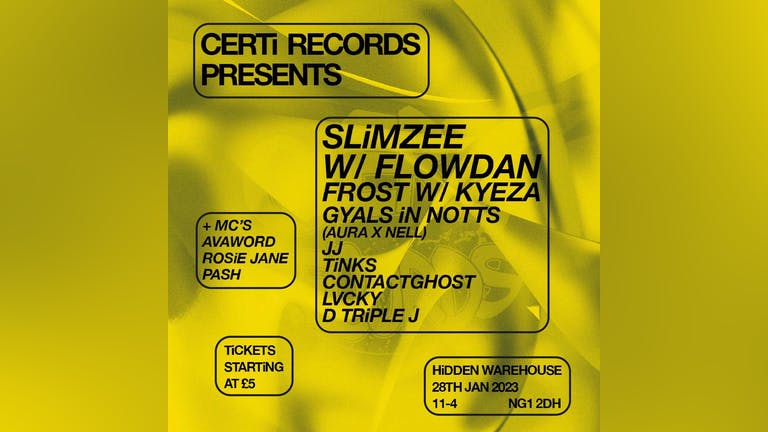 We have invited thru Slimzee & Flowdan to join our CERTiFiED lineup with @gyalsinnotts & @gaz @kyeza on the 28th January to kick off 2023, It’s due to be a madness…

Both Slimzee the ‘Godfather of Grime’, and the ‘Big’ Flowdan have been chiefs in the music industry since the late 90s. These former members of the ‘Pay As You Go Cartel’ helped to massively influence the break-away of grime from UK garage, becoming musical staples ever since.
- As the co-founder of Rinse FM, Slimzee seriously was one of the first to ever do it. From providing Dizzee Rascal with his first ever sets with the Sidewinder Promo and gaining him national exposure, to still shutting down raves & radio stations such as Rinse FM and Pyro Radio today; his relevance will never fade. Without Slimzee n the Sidewinder Promo Sets, the dynamic of raves wouldn’t be the same! 🐐
- It would be very surprising if you attended a UK rave today and didn’t hear a Flowdan vocal. This member of Roll Deep has influenced all genres of music, working alongside the likes of Skepta, Frisco JME, Dizzee Rascal, Frisco, Lethal Bizzle (dating back to the original track ‘Pow 2004’) and many more. He has been one of the main contributors to the story of grime as a whole, heavily influencing the underground shift; whenever you hear those deep lyrics, there’s only one person who it can be‼️

Cop tickets via the @hidden.whs website, LinkTree in our bio x