This event has already happened! Click here to see upcoming events from Heaven Is A Halfpipe Project 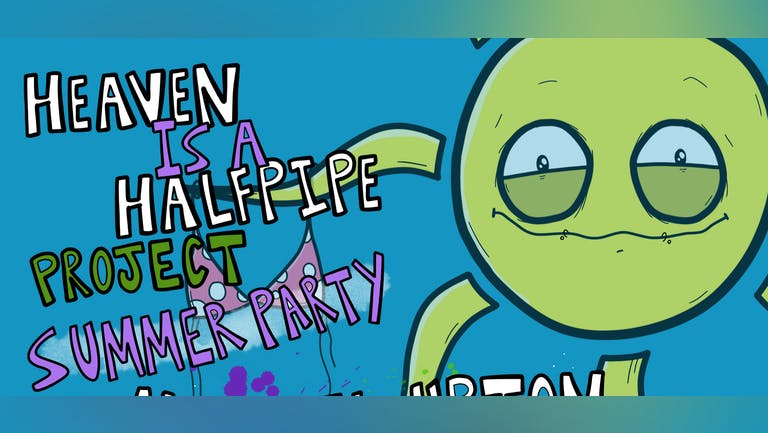 Heaven Is A Halfpipe Summer Party

By Heaven Is A Halfpipe Project

Heaven Is A Halfpipe Summer Party

Back the Sal for another awesome unforgettable night of live music & an amazing atmosphere!

Raising funds to build a memorial skatepark in loving Memory of Ashley Mabbott.

East Midlands based singer-songwriter Michael Upton is an extremely competent and talented lyricist and guitarist. With accolades which include getting into the Top 8 of the national ‘Live At Your Local Competition’ in 2017, as well as sharing a stage with Razorlight at the 02 Indigo Arena London - his original material is gritty, raw, extremely lyrical and instrumentally intriguing.

Michael’s performances have earned him write-ups in local newspapers and magazines, as well as multiple radio appearances across the midlands, he is certainly one not to be missed!

LUNA J is a 20 year old hip hop/pop artist with a punk twist. Her cheeky personality is taking Scotland by storm.

With relatable lyrics and catchy hooks that pull you in with a feeling of familiarity, these are songs that get in your head and don't come out.

LUNA J likes to take influences from artists such as Dominic Fike and Adele to make her lyrics up beat whilst still displaying emotion.

Octavia Wakes are a 5-piece British Alternative-Pop-Punk-Rock band hailing from Nottingham, UK. The band formed in early 2021 and currently consists of Vocalist Maia, Bassist and Backing Vocalist Sam, Guitarists Chris and Tom and Drummer Aaron. Blending the essence of punk-rock, alternative-rock and pop-punk with influences from the Marmozets, Tonight Alive and Stand Atlantic, among countless others, to form a driving, melodic and energetic sound. October 2021 marked the release of their debut single ‘Gossip’ on all streaming platforms to very good reception, very quickly followed by their debut gig at The Metal Monocle, Leicester. Since its release ‘Gossip’ has amassed listeners from; The USA, Philippines, Cyprus, Germany and the UK. Their second single is currently in post-production and is due to be released in the coming months. 2022 is an exciting year for the band with the plan to release their debut EP in the latter half of the year. Octavia Wakes are excited to be back on stage on 22nd March headlining the open mic night at The Soundhouse, Leicester with further gigs planned and booked throughout the latter half of the year..

“Formed late in 2021, The Wednesday Club are a heavy grunge rock band from the midlands with an aim to bring a bit of a nostalgic sound back to a music industry filled with overproduced studio pop music.

Their self-titled almost live EP released in February 2022 and is available on all popular streaming platforms with videos on YouTube.”

Decade & A Day are a pop punk/emo band, from Nottingham, U.K. writing heartfelt lyrics, powerful guitars and heavy drums; tied together with a live show full of raw emotion and passion. Having come off of the release of their latest single, I'm So Sick, Decade have a series of gigs booked around the midlands.

The three piece have been likened to bands such as Neck Deep, State Champs and All Time Low. They have also been featured on BBC Introducing East Midlands with their track 'Circles', BBC Radio Derby's Top Floor Sessions, The Old Farm Bus Podcast, and Notts Rockcast.

After party with Sami Hexx 12am - 3am

Heaven Is A Halfpipe Project