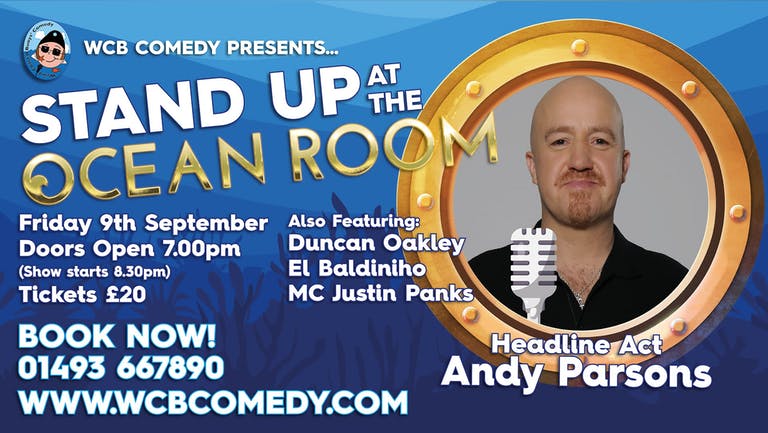 WCB Comedy return to their Stand up at the Ocean Room Show on 9th September with another star headline act. Andy Parsons, star of Mock the Week and tour sell out comedian headlines another fantastic evening of comedy.

Andy is a multi-award-winning comedian who started his career writing for Weekending and Smith and Jones, and went on to become one of the main writers on the ground-breaking Spitting Image satirical puppet show. As well as being a regular on Mock The Week for ten years, Andy has performed on numerous radio and TV shows including Live at the Apollo, QI, Saturday Live, The Stand Up Show, The Comedy Store, The PMQ Show, Scrooby Trevithick, and Parsons and Naylor’s Pull-Out Sections.

To date he has done six sell-out national tours and released four DVDs as well as releasing a podcast Slacktivist Action Group, recorded monthly at the Soho Theatre. He has also appeared on Question Time, The Daily Politics, This Week and Newsnight, and writes columns for The Independent.

Our opener is the amazing and superbly daft El Baldiniho who is a magician and prop comedian performing on TV, in comedy clubs, at festivals and at corporate events across the UK and beyond.

Recently seen on Britain’s Got Talent (where he got 4 yeses) he can also be seen headlining comedy events at The Comedy Store, Up The Creek, and The Frog and Bucket.

He regularly appears at Glee Clubs and is booked by national comedy agencies such as Off The Kerb and Live Nation.

Also appearing is circuit headliner, Comedian, Songwriter, Musician, Actor, One man band, Duncan Oakley who was voted English Comedian of the Year in 2015 and Midlands Comedian of the Year 2016. Duncan has been a musician since the age of six, has performed on the UK comedy circuit since 1999, appeared at the Edinburgh Fringe Festival and on BBC Radio 4.

All acts confirmed at times of booking. In the event that a change has to be made to line up we will replace with similar profile acts.