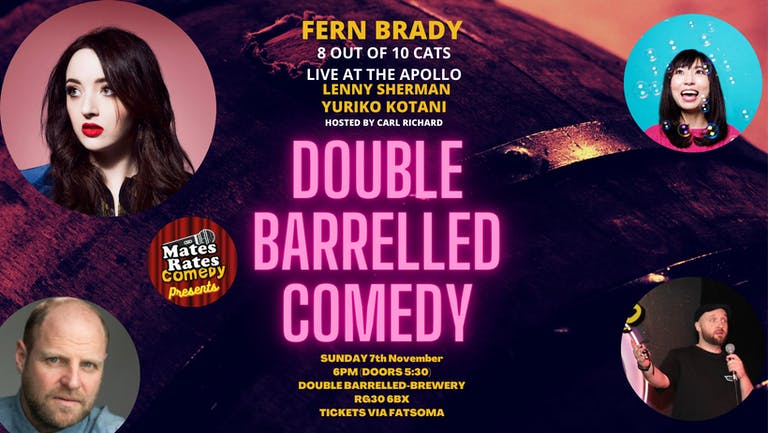 Stand Up Comedy in Reading is back. Mates Rates Comedy is proud to present Double Barrelled Comedy with Headliner Fern Brady on Sunday 7 November at 6:30pm.

Born in Bathgate, West Lothian, Fern Brady graduated with a Bachelor of Arts in Arabic and Islamic History at the University of Edinburgh, after which she trained to become a journalist. However, when an intern at Fest Magazine, a free magazine covering the Edinburgh Fringe Festival, she was tasked with the job of writing an article about a comedy critic trying stand-up for the first time. This was the impetus she needed to realise her true dream of becoming a live comedian herself.

After placing joint-third in So You Think You're Funny? at the 2011 Edinburgh Fringe, has went on to appear regularly on topical panel shows such as 8 Out Of 10 Cats, Frankie Boyle's New World Order, and The Russell Howard Hour.

Known for a brutal, cutting turn of phrase that rips through the noise, she has appeared on many radio programmes such as The Now Show and News Quiz.

Veteran with more than eight years of experience performing gigs for Off The Kerb, Downstairs At The Kings Head, Glee and comedy clubs all over the country.

Lenny made his Edinburgh Fringe debut in 2018 with Make The World a Better Place at Just The Tonic and returned in 2019 with his follow up show Have Fun.