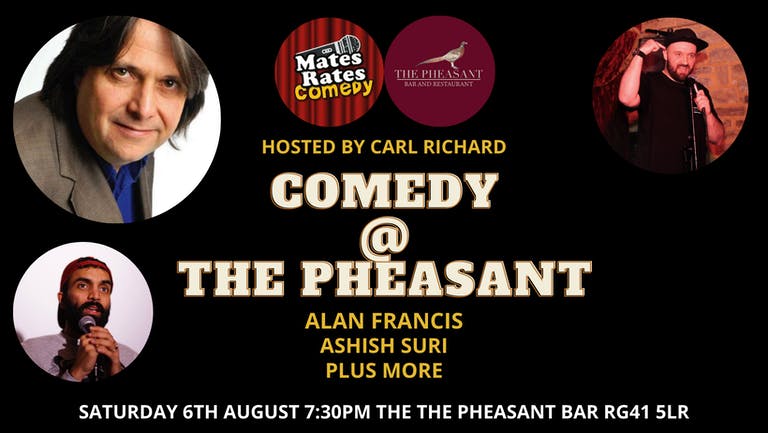 Comedy at The Pheasant with Headliner Alan Francis

Comedy at The Pheasant with Headliner Alan Francis

**Advance tickets close noon on Saturday 6 August. Tickets will then be available on the door for £12.**

Stand up comedy comedy is coming to Winnersh!

Mates Rates Comedy is proud to present Comedy at The Pheasant with Headliner Alan Francis.

The show will take place at The Pheasant on Saturday 6 August between 7:30pm and 9:30pm (door open 7pm).

This month we are headlined by Alan Francis with support from Ashish Suri and some of the hottest new acts from the circuit!

After winning Channel 4’s So You Think You’re Funny? at the Edinburgh Festival, Alan became a regular performer on the UK and international comedy circuits and has performed stand-up on TV a number of times.

He has appeared on TV in Psychoville and Mid Morning Matters with Alan Partridge and has been in Knowing Me Knowing Yule, Alistair McGowan’s Big Impression, Ancona and Co, Alas Smith and Jones, The BBC Stand Up Show, the Alan Davies Show and Alexei Sayle’s Stuff.

Alan has also appeared in TV dramas, Between the Lines and Taggart, and has sustained a successful theatre career, working in the West End, The Royal Court, The National Theatre of Scotland, the RSC and a number of regional theatres.

Ashish Suri is a Comedian by night, a Data guy by day, and a retired Scientist by education.

Starting 2022 with his first solo show at Soho Theatre, London and getting nominated for the prestigious Leicester Mercury Comedian of the Year 2022, Ashish was also awarded the judges' pick Panel Prize at the Beat the Frog World Series and named the runner-up for the Brighton New Grin Comedy Award 2021 within the same week.

He lives and breathes stand-up comedy and is at the heart of a number of scratch comedy shows, supporting grass-roots comedy in his dual roles of artist wrangler and resident MC in clubs like The Comedy Cabin in Hoxton.

Ashish’s journey in the U.K. started as a student but quickly lead him to stand-up comedy in search of a cheap substitute for therapy and lack of social life. Nine years down the line he is now a comedian and a full time immigrant, telling the stories of how outside of the Motherland (India) even the simple things in life are different and that despite his tan, he's just as weird as everyone else.