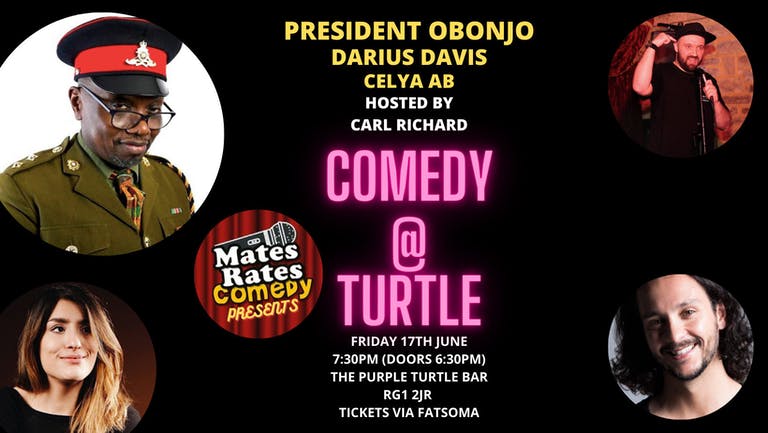 **Cancelled. To transfer your tickets or request a refund please emaill: matesratescomedy@gmail.com**

Stand Up Comedy in Reading is back. Mates Rates Comedy is proud to present Comedy at Turtle with Headliner President Obonjo.

President Obonjo, The Original African Dictator, is a Malcolm Hardee Award winning and increasingly successful stand-up comedian. As the larger-than-life, uber-confident, self-appointed, side-splitting dictator of 'Lafta Republic', President Obonjo has quietly been leading a comedy revolution to become the first President to take over the comedy industry by storm. He has been creating rumblings by storming New Act competitions including winning Luton Comedian of the Year, Runner-Up at Great Yorkshire Fringe and was a finalist in the Naty New Act of the Year competition 2016.

What the press have said:

“It’s a great comic construct, with lots of seized opportunities for playing with the clichés” – Steve Bennett, Chortle

“There was the potential of that high-status, comedy bomb-proof kind of character that Alexis Dubus has created so successfully with Marcel Lucont.” - Ben Veneables, Londonist

“This hour-long show was a revelation... Not at all what I was expecting.” - John Fleming

“On the face of it, it works as a well-crafted political comedy, exposing how the world has treated Africa and left much of it to suffer corrupt governments led by the likes of Obonjo. But it's the layers of context that really make this a fascinating, bewildering and painfully funny experience.” - ☆☆☆☆☆ Fringe Guru

★★★★ 'Bewitches the audience' The Wee Review

★★★★ 'A near faultless and original set' ScotsGay

Originally from Paris, Celya AB is a fast rising writer-performer, with a magnetic stage presence and brilliantly crafted material.

Winner of the Breaking Talent Award in 2019 (Birmingham Comedy Festival) and a finalist in the 2019 Funny Women Awards, Celya recently appeared as a guest correspondent on Yesterday, Today and The Day Before (Comedy Central) and performed a stand up set on Festival of Funny Live (BBC). A regular writer for BBC Radio’s The News Quiz, Celya is bringing a work in progress of her debut show, Swimming, to the Camden Comedy Club on December 17th.

“Great jokes, a strong comic. Both classy and funny. A thoroughly engaging presence and very promising writer who seems to know her place in the world. Strong stuff.”