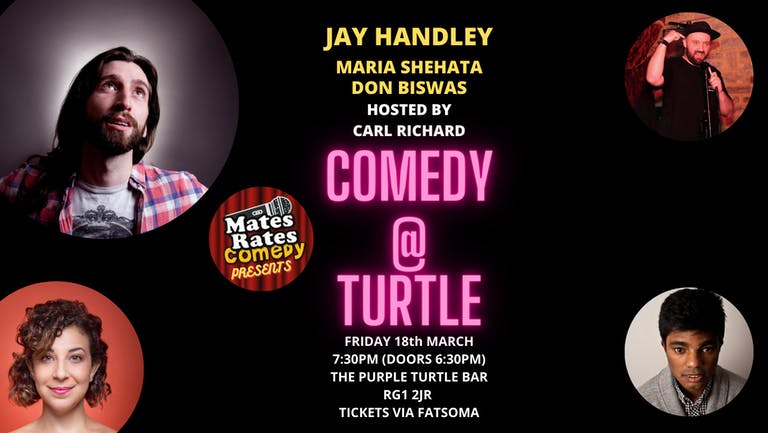 Stand Up Comedy in Reading is back. Mates Rates Comedy is proud to present Comedy at Turtle with Headliner Jay Handley.

Jay emphasises being funny over being right and applies that to a range of sensitive topics other comics would shy away from. He loves nothing more than sharing wrong-headed opinions on matters he should probably leave well alone, with hilarious consequences!

'There are moments here that can go toe to toe with some of the funniest stand up skits I've seen' - EdFringeReview.com

'A top class comic with a great mix of material...his gags are imaginative, polished and proper proper funny' - 4GoodComedians

Maria Shehata is a multi award-winning Egyptian-American comedian based in London. Maria has appeared on Dave Channel’s ‘The Comedy Guide To Life’, as well as appearances on Showtime, Comedy Central, BBC, and Comic Relief's viral Modern Dating Horror Stories.

Winner of Best Comedy at the Miami Web Fest, and Best Comedian at the Hollywood Festival of New Cinema, Maria was shortlisted as one of the Five Best New Acts at the 2017 Edinburgh Fringe by The 99 Club and showcased as Pick of the Fringe at the 2019 Edinburgh Fringe.

Maria supported Bill Burr at the 15,000 seat Resorts World Arena in Birmingham and performed at Latitude Festival. Her writing has been published in Funny Women, British Comedy Guide, and The New York Times. She is co-host of the weekly comedy podcast 2 Non Doctors.

“I LOVE MARIA SHEHATA. SHE’S FUNNY ON AND OFF STAGE AND ALWAYS HAS ORIGINAL MATERIAL... I THINK SHE IS A TRULY UNIQUE COMEDIAN.” - BILL BURR

Don Biswas is one of the gems of the circuit. A politically charged gag merchant who likes to cover a wide range of subjects including his Asian upbringing, his range of disabilities (Dyspraxia, ADHD, Asperger’s) and even the most important of topics.. conspiracy theories. Don has gained huge admiration off all corners of the circuit.