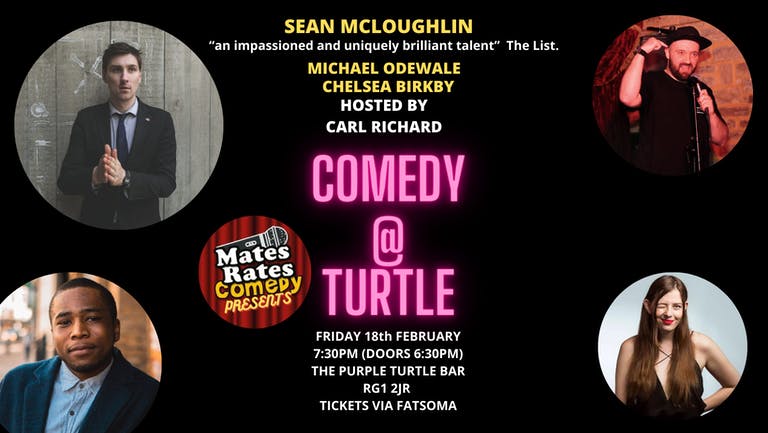 Stand Up Comedy in Reading is back. Mates Rates Comedy is proud to present Comedy at Turtle with Headliner Sean McLoughlin.

Sean McLoughlin is an acclaimed stand-up comedian and writer based in London, described as “The best comedian you haven’t heard of” by Time Out and “an impassioned and uniquely brilliant talent” by The List.

Hugely in-demand in the U.K. and internationally he has most recently been the tour support for Ricky Gervais in arenas across the globe, having previously opened for Bill Burr at the Royal Albert Hall and performed a gala show at the Sydney Opera House. A regular at comedy festivals and clubs the world over, he has also performed six acclaimed solo shows at the Edinburgh Fringe.

Sean has made TV appearances on Stand-Up Central, Comedy Central At The Comedy Store, The Stand-Up Sketch Show and fronted a 5-part series for Vice, as well as filming a set for Kevin Hart’s LOL Network at the Just For Laughs Festival in Montreal and a small part in the Netflix sitcom ‘After Life.’

A fresh and unfiltered voice known for delivering sharp and beautifully executed content, Odewale is taking the comedy world by storm. His debut show #BlackBearsMatter won Best Show at both the 2019 Leicester and Hastings Comedy Festivals and achieved critical acclaim at the Edinburgh Fringe 2019, earning him a nomination for Best Newcomer in the Dave Edinburgh Comedy Awards.

"one to watch" Funny Women