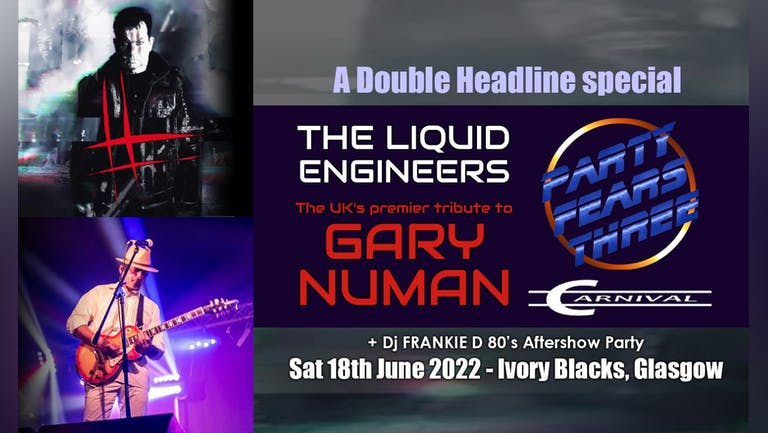 THE LIQUID ENGINEERS Short Biograph:
The liquid engineers are Uk's premier tribute to Gary Numan covering his career from the very first #1 album replicas,(1979) to his 2021 #2 album intruder. Pat Martin, lead vocalist of THE LIQUID ENGINEERS has put together a 5 piece live band that delivers a powerhouse of music without losing the unique Numan 'sound'.complimented by an excellent light show you are transported to the centre stage of a Gary Numan concert experience and you won't be disappointed.

PARTY FEARS THREE biography - Synthetically Recre80d
Ever since it's inception nearly a decade ago Party Fears Three have sought to excavate, recreate and illuminate some of the best songs from the decade which gave the world it's finest synth-based bands and music.
Combining vintage sounds with modern technology to create a contemporary but uniquely recognisable eighties soundscape, the band has thrilled audiences at venues and festivals the length and breadth of the UK including Scotland's Party at the Palace and Belfast's FÃ©ile an Phobail.
Having supported many of the eighties icons whose music they pay homage to, Party Fears Three have received many glowing compliments and endorsement including being joined on stage in London by the drummer of Ultravox, Warren Cann and in Glasgow and Edinburgh by members of The Human League.
Now streamlined and into their second decade as Party Fears Three, the combined talents of Synthmeister Don Thomson, along with Guitarist and "Man of many voices" Michael Lyden, continue to bring to life the music and spirit of artists such as OMD, The Human League, Ultravox, Depeche Mode, Erasure, Talk Talk, David Bowie, Tears for Fears & many more.