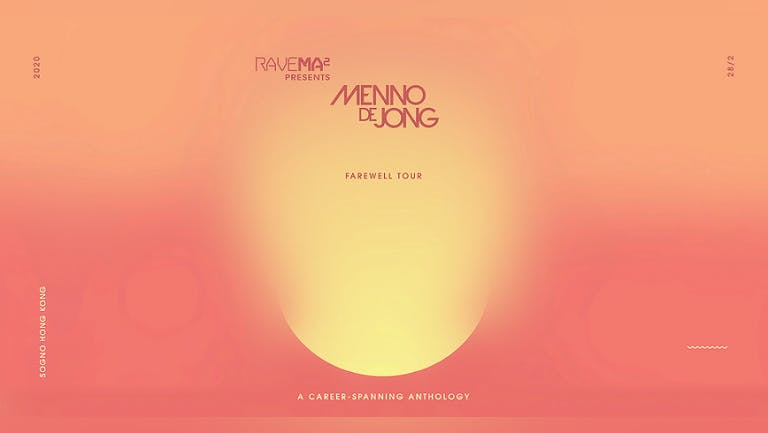 We are very excited to announce the tallest 😆 DJ in the world - Menno de Jong will be performing in Hong Kong for the last time. Marked your calendar now for 28 February 2020, Saturday. It will be an Open to Close 6 hours non-stop music journey from Progressive, Techno, Trance, Psy Trance and Trance Classics. Celebrating 20 years as a DJ, Menno de Jong presents a career encompassing journey cutting across genres with a subtle edge that has become a rare art in modern times. He recently announced his retirement, not only was he constantly away from friends and family, but also unable to consolidate environmental and animal rights beliefs with a profession that involves constantly jetting from one part of the world to another. His initiative to speak up to remind us that the world needs our action to be looked after and treated carefully sent a strong message around the world.

We hope everyone will come join us to dance and meet Menno for one last time, say your final good-bye. We will see you there!

We strongly recommend everyone to purchase mainly can & glass beverages and bring your reusable water bottle for refilling at the venue – Water is FREE!

Menno de Jong is primarily known as a Trance DJ and producer with an international following. Based in Amsterdam, The Netherlands, de Jong was born on March 17, 1984 and was interested in music — classical as well as modern — at a young age.

Being classically trained on the piano and incredibly passionate about music led to him taking up DJing and producing in his early teenage years. he first established himself as a producer with the release of ‘Guanxi’ on the British label Anjunabeats in 2004. In the years that followed he took the Trance scene by storm with singles such as ‘Tundra’, ‘Last Light Tonight’, ‘Spirit’, ‘Turtle Paradise’, ‘Never Lose The Magic’, ‘Place In The Sun’ featuring the vocals of Ellie Lawson and many more. This resulted in him being championed by the genre’s leading DJs including Tiësto, Armin van Buuren and Paul Van Dyk. Numerous remixes for tracks such as ‘ Mark Otten - So Serene’, ‘ Karen Overton - Your Loving Arms’, ‘ John O'Callaghan Official ft. Ria - I’ll Follow’ and the classic ‘Hydra - Affinity’ also proved popular within the Trance community.

He went on to perform at major clubs and festivals worldwide, including Tomorrowland, Dreamstate, A State Of Trance, Amnesia Ibiza and Amsterdam Dance Event and over the years developed an unwitnessed agility in performing, equally talented in delivering prime time sets as well as marathons lasting as long as 10 hours.

After working with a wide selection of leading labels Menno eventually signed with Black Hole Recordings in 2013, where he started releasing tracks on the legendary In Trance We Trust imprint. Arguably some of his biggest releases to date followed amongst which melodic masterpiece ‘Any Other Day’, the club anthem ‘Creatures Of The Night’ featuring Canadian vocalist Noire Lee, a series of three Psy and Tech influenced singles titled ‘Abhyasa’, ‘Ahimsa’ and ‘Ananda’ and most recently collaborating with Adam Ellis to produce what is hailed one of the biggest vocal Trance records of modern times: Set To Sail ft. Kate Louise Smith.

As a result of this strain of successful releases Menno was asked to become A&R manager of In Trance We Trust in 2014, becoming the face of a label with one of the richest histories in the genre and providing a platform for future Trance stars alike.