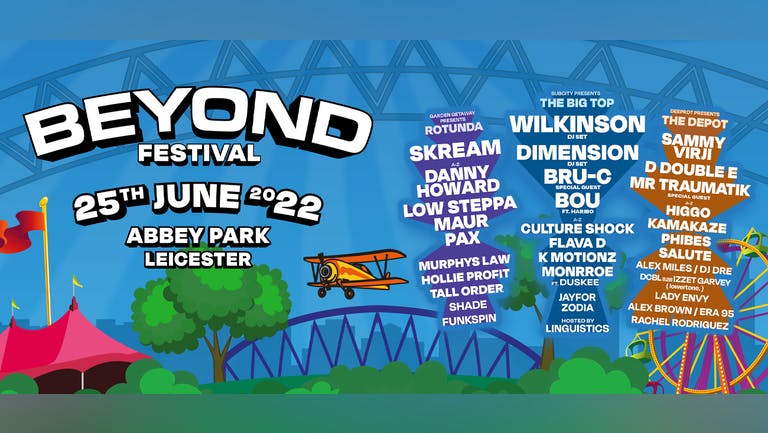 Age restrictions: 18+
Beyond Festival and promoted by Studentgram Leicester
47612 Followers

Beyond Festival has now landed, in Leicester's city centre at Abbey Park. This is going to be any ravers dream, a 10,000 Person dance music festival... ON YOUR DOORSTEP! 10,000 People, 30+ Artists, 3 Stages, 1 City Centre.

Leicester ravers play close attention because we're about to make your day. Leicester city centre's biggest ever dance music festival is finally here, and it’s ready to blow the minds of 10,000 lucky ticketholders.

Over 30 artists will be blasting UKG, house, tech, drum and bass and similar genres across three stages in the stunning Abbey Park for the massive Beyond Festival 2022. And you could be there to live it.

Curious about the Beyond Festival lineup? We got you. So far, some fantastic names have been announced, including Wilkinson, the DJ behind hit tracks “Afterglow” and “Sweet Lies“. Alongside him will be Bru-C, Flava-D, Bou, Culture Shock, Monrroe, Dimension, Skream, Low Steppa, Pax, and Sammy Virji. Even better, there are still other huge artists that will be announced soon.

With such a cracking lineup, tickets won’t last long. Snag your Beyond Festival tickets now for eleven hours of top tunes and skanking.

This event is strictly 18+