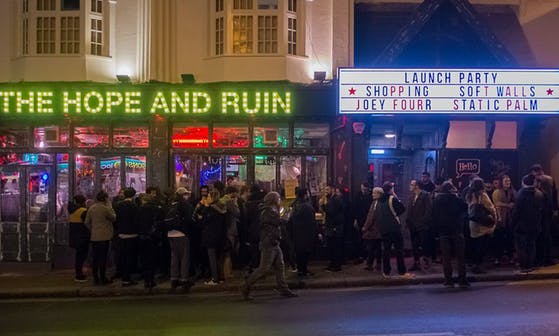 About The Hope & Ruin Live

Character is wear and tear, it’s cramming a room with things you love, character is chaos. And that's exactly what you’re going to find in all the old things here in the bar.
With that feeling in mind the magnolia has remained in the tin, in favour of leaving the chips in the old, well-used paintwork and exposing the age of the worn wood. The effort instead has been put into ingenious use of found objects to make the bar look like nothing you’ve seen before. There’s so much going on that you might miss some things on the first visit, but some of the reclaimed objects are so big you could literally live inside them. The venue upstairs has become a much more practical live music space from simply moving the bar to the back of the room. That’s considerably more easily said that done, by the way. The unmissable gigs of the past like The Strokes, Adele and Bonnie Prince Billy (who have all played in the venue) are only going to increase. The support of the local music scene will remain, as well as making space for upcoming acts like top-selling songwriter George Ezra and 2015 BRIT Award Critics’ Choice winner James Bay, who have both played here. We have plenty of lagers, keg beers and cask ales available from our orange and purple pumps. Plenty of local craft beers in pretty cans too. Our entire drinks offerings are now vegan. The caravan in the corner is home to BEELZEBAB who offer the finest 100% plant based cuisine. Including their infamous vegan kebab, loaded fries and dogs. As well as brownies and Boho Gelato ice cream. Keep your eyes peeled for monthly specials and new additions to the menu. Of course there’ll be DJs at the weekend. Plus jumble sales, swap shops, and DIY bands in the bar. We have a monthly drawing club from Cult Milk plus we're home to legendary quiz nights brought to you by Ink Mathematics. The Hope & Ruin is completely unique, and one of the most visually arresting bars you will ever drink in, certainly in Brighton, and the venue has taken a big step up. Plenty of good times to be had.