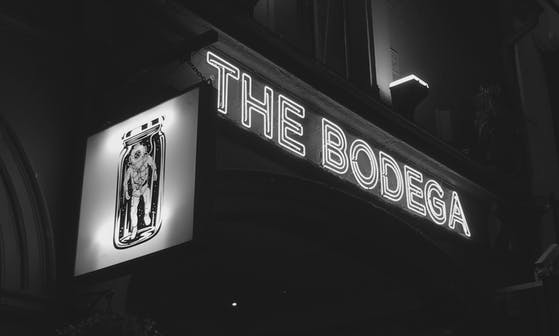 Universally regarded by locals and students alike as one of the best places to hang out, party and listen to live music in Nottingham - the Bodega is a must visit venue that has been at the very forefront of the midlands music scene over the past two decades. With a multitude of awards under it's belt including Best Medium Bar at the Best Bar None awards 2011, the Bodega holds it's own as a great all rounder whilst having cemented itself a reputation for bringing world class stadium and festival-headlining talent to audiences before they made it big.

Previous guests include (to name but a few...):

As well as being an epicentre of the live band scene we have played (and still play) host to some of the city's most notorious and revered club nights - The Pop Confessional, Liar's Club, Sounddhism, Itchy Feet, Lost Boyz Club, Highness Soundsystem, Electric Banana and Barefootin for starters - and are the go to spot in Nottingham for listening to new music in a comfortable and welcoming environment. Our uber resident DJ The Reverend Car Bootleg is a legend in his own right and in actual fact knows more about music than John Peel and Spotify combined.

It's also the first choice for big bands looking for a place to hold their after parties (maybe because many have played here!) and so there's been a few very famous faces here over the years, with the kinds of tales that would ensue with them letting loose after a big show. We won't go into too much detail on that but think Neil Morissey (Men Behaving Badly) singing along to the full length of Rapper's Delight in the downstairs bar and you're at Pop Confessional a couple of months ago.