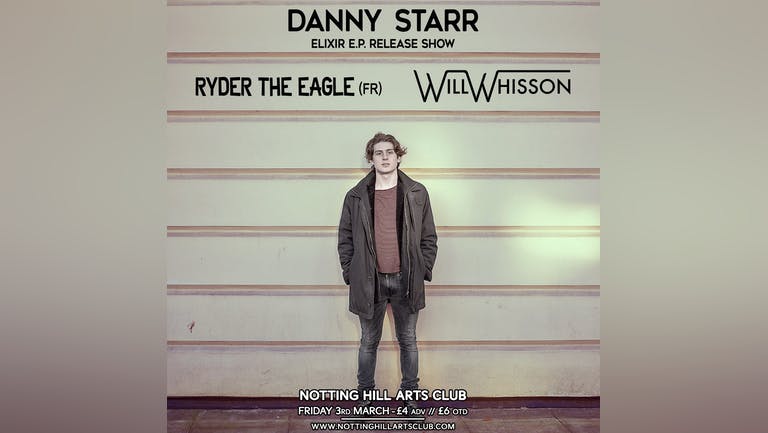 FREE ENTRY TO AFTERPARTY TIL 2AM

Danny Starr is a 18-year-old self-taught musician, inspired by The Kooks, Alex Turner and Amy Winehouse, with lyrics make you stop and listen.

Huw Stephens “this stands out.”

Before music Danny played for London Wasps and had an England trial. But after suffering multiple shoulder dislocations and 3 surgeries he turned to his second passion: music. He has been playing live shows since the age of 15 all around his native London.

“The combination of soaring vocals and foot-tapping, anthemic choruses is enough to keep you listening for days.” - One Stop Record Shop

Danny Starr released his debut EP called ‘Darling’ on The Animal Farm label on the 23rd of September 2016.

Kickstarting 2017 - Danny Starr returns with the release of a new EP called ‘Elixir’ to be released on the 17th of February 2017.

Ryder howls love and whispers hate through songs that are just like his bike: stripped-down, rusted, roaring.

We may think of Beck, Julian Casablancas or The Walkmen.

But we know one thing for sure: Ryder The Eagle is riding fast on the road to sincerity and nothing will stop him.

Despite only launching himself as a solo performer in May 2016, Will has introduced himself as one of the most exciting new talents to emerge recently thanks to the release of a successful debut EP (produced by Brett Shaw (Daughter, Florence and the Machine)) and a relentless touring schedule.

His live show offers a wealth of acoustic guitar playing techniques led by a unique vocal, helping to deliver a sound that sits somewhere between artists like Ben Howard, John Butler and Tom Petty.