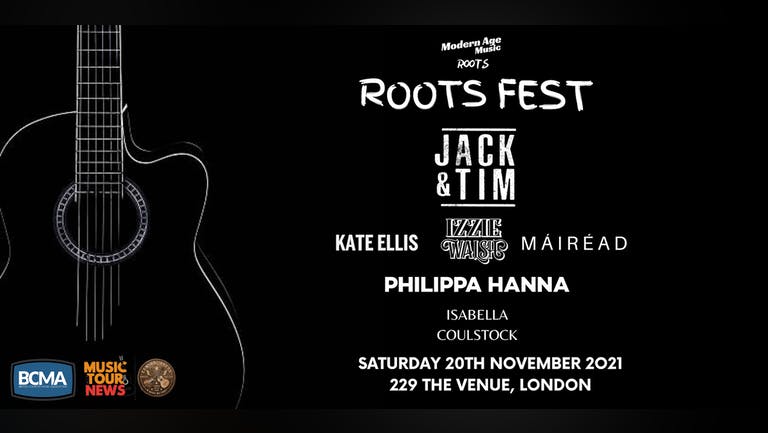 Age restrictions: 16+ with over 18 adult

Hailing from Norwich, The "Golden buzzer” Father and Son Songwriting Duo Jack & Tim have shown they are much more than a moment on a TV show, Now 16 , young Jack is Rockstar in the making , and with support from Guitar legends Gibson ? they seem to think so too !Having performed all over the world from New York and throughout Europe, Jack & Tim head out to Nashville this September to finally lay down their debut album, postponed due to Covid.
Several Singles later and over 250 million views , the boys have just begun.

Manchester singer songwriter Izzie Walsh has a unique sound that blends country, bluegrass, folk and Americana, Izzie Walsh has built an impressive organic fanbase over the last couple of years. Not only does she have two BCMA Awards and an Indie Week UK award under her belt, Izzie is also a former BBC Introducing Artist of the Week and has even performed on ITV’s Cold Feet.

Izzie Walsh has performed across the UK and internationally, turning heads with her unique style and sound with Sold Out Shows at Manchester’s Deaf Institute and London’s Slaughtered Lamb. Her powerful vocals and honest lyrics captivate a range of audiences and make a bold statement. Previous festival appearances include Bluedot, The Long Road, Buckle & Boots, AmericanaFest UK and SummerTyne Americana Festival.

is an internationally acclaimed performer racking up over 1500 shows in 25 countries. Since her industry debut in 2007, she has released 5 critically acclaimed, studio albums winning fans in the likes of Leona Lewis and Lionel Richie. The Yorkshire born, half-Irish, Singer-Songwriter is a rarity in the UK Music Industry, bridging the elusive gap between Gospel, Pop and Country music.Known for her relatable songs and soulful, Country-tinged vocals, Philippa has drawn comparisons to the likes of Ed Sheeran, Dolly-Parton and Taylor Swift. 'Move over Taylor Swift' [Maverick Magazine].Her online videos have racked up millions of hits, with her Gospel version of Ed Sheeran's 'Perfect' tipping almost a million Facebook shares. As well as annual headline tours in the UK, Philippa has performed at the prestigous London Palladium an impressive 6 times, the 02 Arena and a sold-out Royal Albert Hall in May 2019 as special guest for Royal wedding singers 'The Kingdom Choir'

From playing a live session for Bob Harris at just 13 to performing at iconic venues such as The Troubadour London and The Bedford in Balham, to The Black Deer Festival and the historic Hever Castle, and more recently opening for Jools Holland, Isabella has had a wealth of experience already at the age of 19.
She makes regular appearances on the live festival scene, BBC Radio Kent and Chris Country Radio, and has many songwriting collaborations and credits to her name.

is an Americana singer /songwriter born in Louisiana, raised in New York, and now based in London.

Kate’s southern country-folk roots come from her father who was an important early musical influence – he once played guitar with Hank Williams on the famous Louisiana Hayride, where Elvis and Johnny Cash started out.

Kate’s emotional and seductive vocals take you into a world of private beauty, reflection and feelings. The music is always intimate and evocative – you listen and want to be there.

Kate says. “I hope that whatever people get from the music, they’ll be moved. I hope that they’ll find something that is beautiful and truthful. I don’t think that you can connect with any real emotion without truth.”

A journalist for the UK Observer newspaper said: "Kate Ellis writes hauntingly beautiful songs and has an amazing voice, I'm a fan!"

"Delicate, melodic music with the ring of truth to her words. Highly recommended." R2 MAGAZINE ★★★★

"Kate Ellis put down her law degree to pick up a guitar – thank god she did!.” BBC RADIO ULSTER

has been described as one of the brightest stars on the UK country scene. Born and raised in County Tyrone, country music has been in Máiréad’s blood since she was born. With an incredible and unique voice, honed from singing up and down the length of Ireland from the age of 7, the now London based singer has captured the hearts of many loyal fans, earning comparisons to US country stars such as Leann Rimes and Faith Hill.

Máiréad's past releases, ‘If you loved me once’ and 'Crying on the Dancefloor', have gained fantastic radio play in England and Northern Ireland including Country Hits UK, Chris Country, Downtown Country and Downtown Radio NI and have amassed over 75,000 streams across streaming platforms to date.