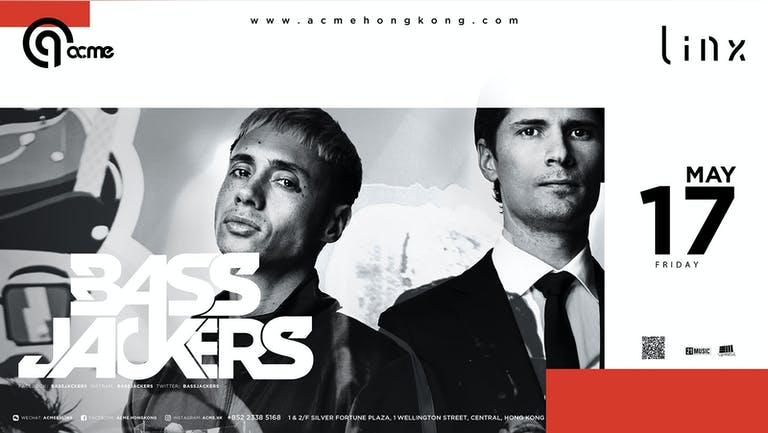 DJ, Marlon Flohr, and producer, Ralph van Hilst, who together form Bassjackers, are perfectly in sync as a duo. Their opposing personalities – Marlon being the wild one rocking each and every stage they play and Ralph the more cool and collective preferring to shine behind the scene on the producer seat, are a perfect combination for this unique one dj-one producer collaboration.

The duo exploded onto the scene and in 2011 their dance floor bomb “Mush Mush” was picked up by Tiësto and released on his label Musical Freedom. The track dominated the Beatport top 10 chart for over two months and was one of the biggest festival tracks of the year. This was a sign of things to come.

Since then, Bassjackers have reached massive new heights in their career with numerous chart-topping bangers and hit collaborations with the likes of Martin
Garrix, Afrojack, KSHMR, Dimitri Vegas & Like Mike, Dyro, R3hab, Snoop Dogg and Showtek, to name a few, as well as remixes for A-list artists including Rihanna, Enrique Iglesias, Moby, and Ne-Yo. At the top of their game, Bassjackers continue to tear up stages worldwide and wow crowds along the way. Meanwhile, Bassjackers have over 2.1 million monthly listeners on Spotify and YouTube videos with 10-90 million views.

Dave Lambert is without a doubt one of the most influential DJs in the Belgian House scene. With a career of 15 years and counting. He has played all 10 editions of Tomorrowland & the first edition of TomorrowWorld 2013 and also opened the mainstage of Tomorrowland in 2012!

Besides playing all the big national festivals such as Sensation (White), Tomorrowland (Mainstage), Cityparade, Laundry Day, Summerfestival, Extrema, Dance Valley, Groovecity and many more, he was also resident in 3 of Belgium’s biggest and most notorious clubs such as Versuz, La Rocca & Zillion.

With an incredible amount of gigs he always finds the means to get a crowd go mental. You can easily say that he’s a genuine crowd pleaser without doing to many concessions on his musical choice.

Internationally Dave is no stranger either with gigs in countries and cities such as Japan, Miami, Brazil, Dubai, Spain, Ibiza, Croatia, Germany and several others! Besides releasing over 40+ compilations in his career, his weekly radio shows are aired over +30 stations worldwide and reach over 15 different countries! On a production level, highlights include ‘Yeah’, ‘House In Play’, ‘Beep’, ‘S Vibes’, ‘Music For Peace’ (official Cityparade anthem 2009) My House Is Your House and several others. His records have been released in countries such as Russia, Scandinavia, Eastern Europe, Germany, Swizz, Austria, Italy, South America, South Africa, Brazil, US, Japan and many more!

Terms and Conditions
- Advance Ticket: $200 including 2 drinks.
- There is a 7% online booking fee charged per ticket sold.
- On purchasing the ticket you agree for your personal details to be provided to the venue for ticketing purposes on the door on the night of the event.
- On purchasing the ticket you agree to subscribe to the venues newsletter.
- This event is only permitted to those over the age of 18.