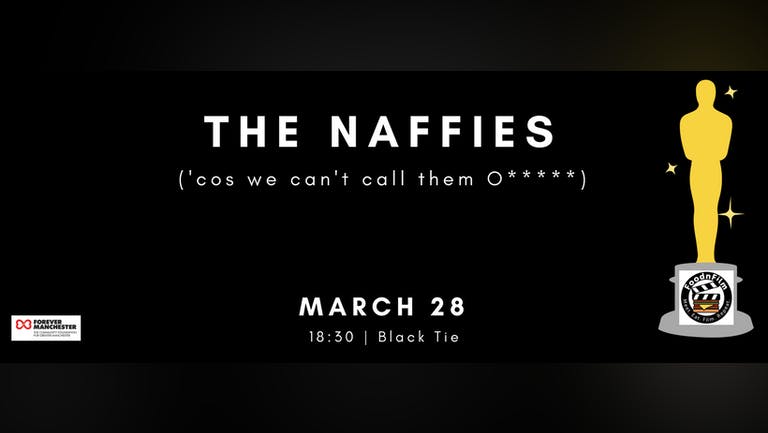 The Naffies 2018 - A night of awards and fundraising

The Naffies 2018 - A night of awards and fundraising

YOU MISSED IT.  #TheNaffies is now sold out! Apply to join the waiting list or join us for a movie soundtrack filled After Party for just £5.

Join us for a night of awards and fundraising as FoodnFilm hosts our very our take on a famous film award, entitled (because our awesome IP lawyer advised us to ensure there were no trademark infringements) 'The Naffies'.

WHERE: Now that would be telling.... it's in a secret, city-centre location (only revealed to those who book)

WHY: because FoodnFilm AND Forever Manchester (and a hundred-ish reasons below)

DRESS CODE: Dress to Impress. We are talking Black Tie and Ballgowns. Whilst it is the not the O***** it is a night of fundraising and film awards after all.

- Drink of fizz on arrival

- Oscar trivia - the opportunity to compete to win some tat (wahoo!)

- Networking (have your mates networked at The Naffies, uuuhhhh NO)

-  WE NEED TO SETTLE WHO THE REAL BATMANC (Batman of Manchester) IS ONCE AND FOR ALL!

- Proceeds all go to Forever Manchester, so you can trade in your good karma to reduce next-day-roughness

- Entry to Naffies after party, sponsored by Vivid

But remember, this is an alternative film awards evening. We don't do things "traditionally" at FoodnFilm, so there will be lots of surprises as you experience our take on Oscars night!

And, why not get involved with the 'Let me sponsor something' package. This will give you the opportunity to tick something off the bucket list as we invite you to straighten your ties and dresses -or perhaps even both- and present an award up on stage (oooh, ahhh). We will also donate £25 or £30 to Forever Manchester on your behalf (depending on whether you want a Tombola ticket) and shout as loud as we can about you on social media (as will the good people at Forever Manchester). It's an absolute steal!