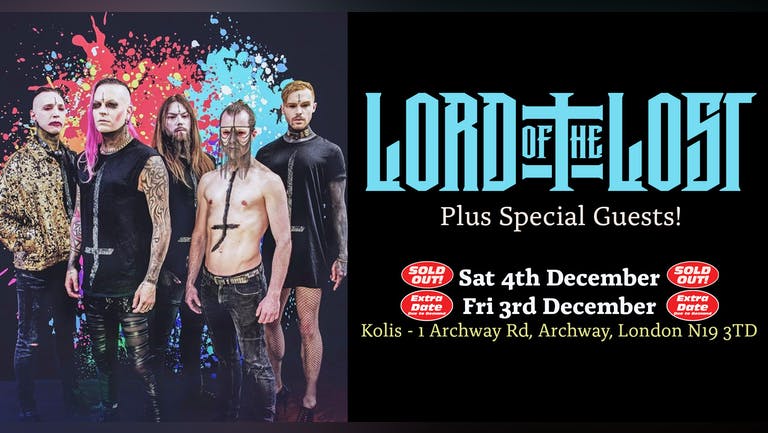 LORD OF THE LOST CANCELLED!

LORD OF THE LOST CANCELLED!

Finally with the imminent introductions of vaccines in the UK, there is a real light at the end of the tunnel, however it will take a bit of time before gigs can go ahead normally.

So we need to reschedule this Lord Of The Lost show quite a way forward due to the band’s heavy touring schedule in 2021. The new date is Saturday 4th December 2021!

Thanks for your patience and understanding and we hope to see you on the other side!

Hamburg based musician Chris „The Lord“ Harms is not only an extremely versatile singer that can easily manage the entire range between heartfelt clear vocals and aggressive death growls, but also an extremely charismatic character and one of Germany’s most prolific musical talents. Chris has pretty much been a musician all his life, taking up cello lessons at age 5 and singing/playing in rock bands since age 12. With Philiae, The Pleasures, UnterArt and Big Boy, he has been a lot of very prominent bands in the Hamburg scene. With this background, it was only a matter of time until Chris Harms’ unbridled creativity would need its own vehicle of self-expression…
Enter Lord Of The Lost! Formed in 2007 as a solo project, Chris quickly realized that his new baby would have to be a full-blown band when he started working on the first demos for his debut album “Fears”. Hence, he recruited the band’s line up from his extensive circle of musician friends and Lord Of The Lost as we know them were born, the group with its unique and dazzling mix of Gothic and Glam Rock, spiced up with electronic and progressive elements. Demos were sent out and the band landed a recording deal with Out Of Line Music whom Chris had been working with rather successfully in UnterART before. The band self-produced a video clip for “Dry The Rain” and the label organized a promo CD containing both the song and the video to be widely distributed at M’Era Luna Festival 2009. Thus, the foundation stone for one of the most energetic and popular bands from the German Dark Scene was laid down.
The debut album “Fears” was released in February 2010 and received very well by the music press. The band filmed a second video clip, this time for “Last Words” and then started what they themselves are referring to as their “never ending tour” which quickly earned them their reputation as being one of the German scene’s hardest working acts. Lord Of The Lost also played the big festivals (WGT, M’Era Luna, Wacken) to a very good audience reception and went on to producing their second album rather enthused.
As a first glimpse, they released the digital single and video clip for “Sex On Legs” in March 2011. The concept album “Antagony” followed in April and marked a massive progression for the group that built upon the debut successful sound while expanding it with a plethora of different and new elements. Rightfully, Sonic Seducer magazine named the release a “masterpiece” and featured Lord Of The Lost with an extensive cover story. The band then filmed their next clip “Prison” and spent a lot of the year on the road, playing a successful tour with Mono Inc. plus a lot of headlining and festival dates, documented in detail on their video log “TV Of The Lost” on the web. They also secured endorsement deals with Cyan, DV Mark, Mark Bass, Meinl und Tama, thus resulting in an altogether very successful year.
The Hamburg-based lads kick into 2012 with the EP “Beside & Beyond” which contains alternative takes on hits, unreleased gems as well as previously unreleased fan favorites (among them a cover version of Lady Gaga’s “Bad Romance” which is very popular live.) In summer, they followed up with the smashing single “Die Tomorrow” (which was accompanied by an extremely laborious video clip which had each of the band members pushing their personal boundaries) and a third studio album of the same name, on which Lord Of The Lost sported an even more versatile musical approach than on their previous outings. This year had the Hamburg-based lads touring even more extensively than in previous years, supporting Eisbrecher on their tour and absolving an almost completely sold out headlining tour with Unzucht.
The young year 2013 was greeted in January with the digital single “See You Soon” and a fittingly moody video clip. To gain a longer time period for conceiving and recording album number four, Chris Harms and his lads decided to see a long time wish fulfilled: after more and more fan requests for a live album came in, they decided to professionally record the sold-out show at Hamburg’s Knust club for optimal reproduction of the band’s live energy. The result is titled “We Give Our Hearts” and captures the energetic performance in a massive sound. The album is also released as a deluxe edition sporting a bonus mini album with new studio tracks that showcase the myriads of facets of Lord Of The Lost’s music. The band is also very active at the touring front, this year, playing every major festival, with another headlining tour and a tour supporting Subway To Sally on their “Eisheilige Nächte” following in autumn and winter.
Lord Of The Lost combine charisma, inexhaustible energy, a gripping live presence and a golden hand for lasting tunes, thus being one of the dark scene’s most unique acts, these days. Straight to the heart and right in your face… or to quote Mono Inc.’s Martin Engler: “Lord Of The Lost will either be really big… or I don’t know anything about music.” See less