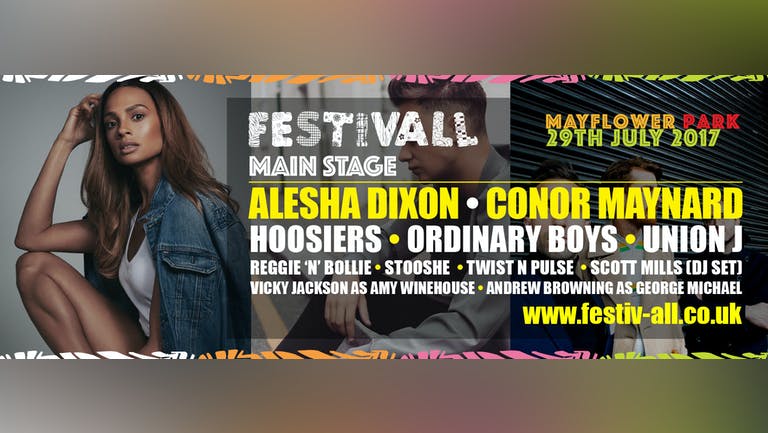 Get ready for Southampton’s hottest party in the park as FestivALL – Southampton’s newest one-day music and entertainment extravaganza – takes over Mayflower Park.

There will be memorable performances from some of the biggest names in music, including an array of chart topping bands and solo artists! Acts announced include Alesha Dixon, Hoosiers and host Scott Mills!

And if the music wasn’t enough, there’s a comedy tent with both an adults and kids line-up, headlined by Stewart Francis featuring some pant wettingly funny people and the finest of national and local comedy talent.

FestivALL is also a new home of the ElectroLove big top, which will be blasting out some 80s and 90s nostalgia.

Swing by the Band Stand for the best in local talent and hear some impressive homegrown unsigned talent throughout the day.

For the small people in your life, FestivALL presents Tiny Fest – a kid's festival within the main event. Expect childrens’ entertainers, interactive science experiments, magicians, face painters, the bounce zone, petting zoo  - plus loads more treats to be announced. More than enough to give your bundles of joy a festival experience they will not forget.

If you’re more of a sports nut, then the Saints Foundation penalty shoot out is for you, or if you're a digital whizz the Barclays Digital Eagle Lab will bring the latest in technology.

And for those who fancy a view above the rest, FestivALL introduces the VIP Hill and lounge.

Much more to be announced!