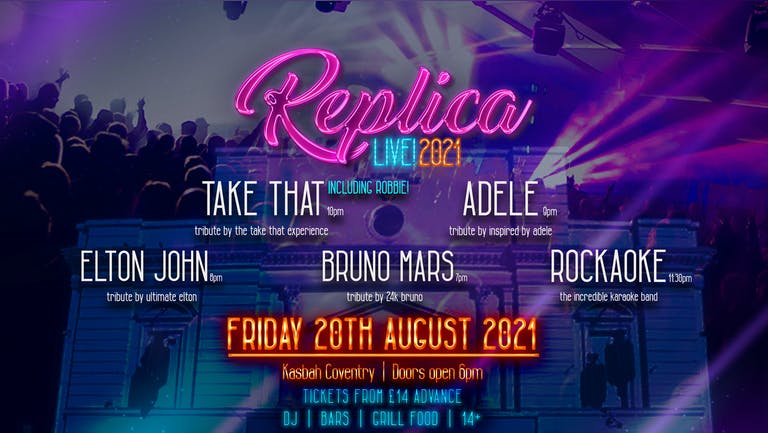 Hello… it’s been a while! We have an important update.

We’ve been patiently watching, waiting and working towards Replica LIVE! 2021 with great anticipation of bringing together four world-class tribute acts, the brilliant Rockaoke band, a fantastic production and over 1,000 fun-loving revellers. Time is ticking away with just 11 weeks to go now!

Amongst the national headlines, you will have heard that the events industry is facing difficulty in a number of ways. More than a quarter of UK festivals have been cancelled due to the inability to acquire event cancellation insurance that protects in the event of a change of COVID-related restrictions. The Cathedral Ruins is our first choice and Replica LIVE!’s ‘home’ venue but, in this environment, we just can’t make it work.

But we are determined that the show must go on!

We are thrilled to announce that this edition of Replica LIVE! will now be held at Coventry’s iconic live music venue, Kasbah. In 2018, after a decade of providing the best live music acts from all over the globe, the Kasbah underwent a huge refurbishment and cemented itself as one the best independent venues in the UK. It’s an incredible place for us to showcase our world-class tribute festival.

The Kasbah team are dedicated to providing memorable nights to all customers and having everyone leave with a massive smile on their faces. Since the name change from the Colosseum, they have continued to make Kasbah the most exciting place to be for live music in Coventry. With a huge main room featuring big screens and room-wide custom LED’s, the Globe ‘VIP’ bar and an amazing fully-covered outdoor space including a full bar, heating and the Kasbah Grill, it’s well-equipped to provide everything we need for Replica LIVE!

The Replica LIVE! show and line-up remains exactly as advertised and all tickets purchased are still absolutely valid. We are really excited to see Replica LIVE! take to the Kasbah stage – and over 700 of you are already confirmed to join us! If you haven’t got yours yet, there are still some tickets available!

🎟 TICKETS ON SALE NOW!
⚠️ First AND Second Release Tickets already SOLD OUT!
👉 GET YOURS ASAP

Replica LIVE!, Coventry's own much-loved tribute festival, is returning to Coventry for its fourth year!

plus the ROCKAOKE band are back!!

24K Bruno is a powerful and energetic show, with 100% live vocals from the very talented ‘Andres Cruz’, paying tribute to the amazing Bruno Mars. With explosive sound, lights, screens and professional dancers, this is a show not to be missed! Featuring hits from Bruno’s Doo-Wops & Hooligans, Unorthodox Jukebox, and 24K Magic Albums, including Marry You, Just The Way You Are, Locked Out of Heaven, Treasure, Uptown Funk, 24K Magic, Versace on the Floor, Finesse and much much MUCH more. This show guarantees you will be dancing and singing along with all your favourite Bruno hits, whilst being immersed in the amazing vocals, choreography and one of the slickest performances you’ll ever witness!

"Andres delivered such a fantastic show - full of so much energy and talent!"
"The whole show has such a great vibe and the dancers are brilliant"
"Not just your typical live tribute show... a five star performance for sure!"

Some tribute artists look like their idol, some sound like their idol. Paul Bacon as Elton John does both! Close your eyes and you won’t believe your ears, open your eyes and you won’t believe them either! You simply won’t find a closer tribute to Sir Elton John. With an extraordinarily similar singing voice to Sir Elton’s, and total comfort on the piano, Paul is able to draw on an amazing back catalogue of hits to produce a truly wonderful celebration of Elton’s music. Paul’s performances also feature some of Elton’s actual clothes, bought from his ‘Out the Closet’ sales.

"A WOW of a show. Spellbinding, magical, the man is great!"
"Blimey, he's got it down! How are his tantrums?" - Clive Franks, Sir Elton's live sound engineer for over 35 years
"I defy anyone to not believe that Paul Bacon is the 'ultimate Elton' tribute artiste." - John Reid, Sir Elton John's Manager

Jax Hall's 'Inspired By Adele' Show is packed full of the greatest hits from Adele's chart-storming albums 19, 21 and 25. Combine this with replica costumes, an incredible stage presence and beautiful vocals that can be closely compared to the pop diva herself, Jax brings to life the hits you love to sing to, cry to and shake your hair to.

>> TAKE THAT by The Take That Experience [10pm]

Wowing audiences everywhere they go with their amazing vocals, stunning costumes and electrifying dance routines, they continue to successfully recreate the magic of Take That after eight years on the road together. The Take That Experience bring you all the classic songs you know and love, from the 90’s through to the present, including smash hits ‘Pray’, ‘Relight My Fire’, ‘Patience’, ‘Shine’ and ‘These Days’. The band features a permanent ‘Robbie’ who brings alive songs such as ‘Angels’, ‘Rock DJ’ and ‘Candy’ to an already explosive show!

We are the band, but YOU are the star!

ROCKAOKE are the UK's original, best and only specialist live karaoke band, inviting their audience to 'live the dream' by taking to the stage and singing their favourite hit with a full live band, including backing vocals! There's over 200 songs to choose from covering all genres and eras – from Abba to Arctic Monkeys – from Fleur East to Kanye West.

Every year the spaces on the Rockaoke slot fill up so quickly that this we've booked another extended 90 minute set! It is the best way we can think of to end the night!

All the fun, dancing, singing, eating and drinking will take place at Coventry's iconic live music venue, Kasbah, complimented by a full festival-style production including multiple bars, a fully-covered outdoor area and The Kasbah Grill!

Seating will be available around the venue, with the dance floor reserved for partying!

This year the show is once-again open to ages 14+; attendees under the age of 18 will need to be accompanied by an adult.

Doors will open at 6pm.

Tickets start at just £14 and are on sale now.

Please note, this event was postponed on 10/04/2020 and will now take place on 20th August 2021. The refund window in the event you are unable to attend has now closed.