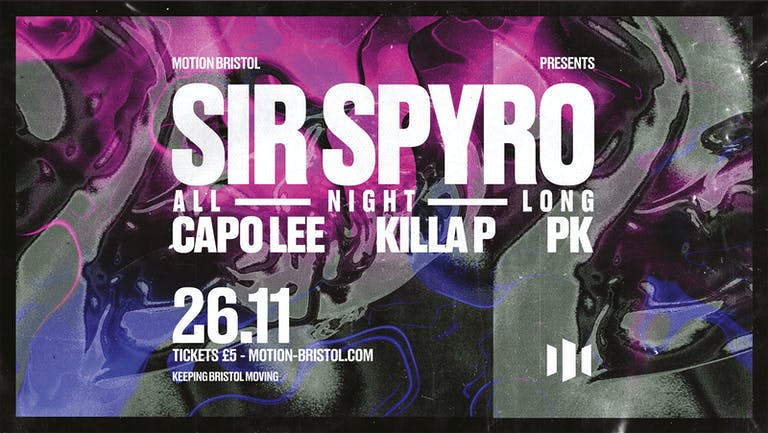 On the 26th November Motion welcomes DJ/Producer and BBC 1 Xtra host Sir Spyro for a one-off 'All Night Long’ set. Expect a mix of underground genres and a selection of very special guests. 🔊

Sir Spyro stands as one of the most recognised and respected artists in grime, with a career spanning over 10 years and collaborations with some of the scene's biggest MCs, from Stormzy, JME, Big H, Capo Lee, D Double E, Ghetts, P Money and many more.

Spyro went on to travel the world as a Tinchy Stryder’s tour DJ before rekindling his passion for producing in 2012, in turn discovering that his grime productions had the full capacity to travel on their own. As a producer, his signature ‘Sounds of the Sir’ beat tag has since developed into one of Grime’s quintessential seals of approval and yet his sound remains markedly varied.

From serial hit-maker, to resolute tastemaker, Sir Spyro is dedicated to showcasing Grime’s most exciting tracks and freestyles as the go-to Grime selector.