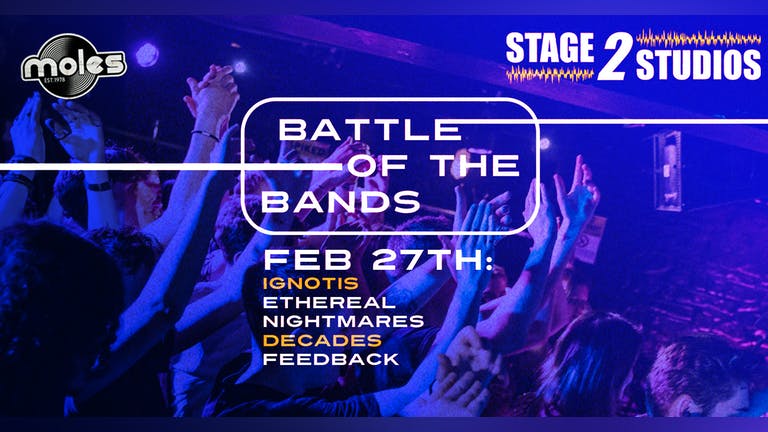 It's Heat 4 of the Moles Battle of the Bands on Feb 27th 2023, we have teamed up with Stage 2 Studios to bring a fantastic prize opportunity of recording a 2 track single package (2 days in the studio plus mixing) at Stage 2 Studios in Bath.

Our first Heat kicks off on Mon Feb 27th at 7pm, with the following artists: (Not in performance order)

After all 4 acts have played, our judges will put 2 artists through to the Semi Finals giving them a chance to win a place in our Final on Monday March 20th.

Gig goers will also be given the opportunity to join in the judging process by being given 2 voting tokens that they can use to vote for their favourite and 2nd favourite artist on the night. These are collected in person after the last act finishes so make sure you sow up to give your support on the night and help 2 acts take a step closer to that amazing prize (and the boasting rights of The Moles Battle of the Bands Winner 2023!)