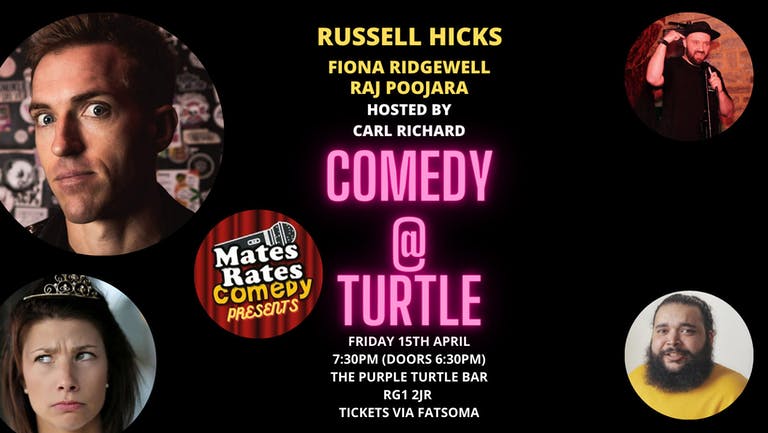 **Advanced Tickets close mid day on Friday 15 April. Limited tickets are available on the door for £17.50**

Stand Up Comedy in Reading is back. Mates Rates Comedy is proud to present Comedy at Turtle with Headliner Russelll Hicks.

From the moment he steps on stage crowds are hooked by his infectiously rebellious personality and unapologetic style as he delivers entirely original comedy content right there in front of your eyes.

Indisputably talented, there’s no comic quite like Russell Hicks.

A twenty-something year old female, who has a skewed look at her life experiences whilst continually looking to achieve a fairy-tale life.

She has won a number of stand up comedy competitions including ‘The Blackout’ at Up The Creek (twice). Beat the gong at the Comedy Store London in December 2014. Also in that year she performed in Edinburgh in the semi-final of the renowned competition ‘So You Think You’re Funny?’. In May 2015 Fiona was a finalist in ‘Jokers Joker’. Most recently Fiona was a semi finalist in Funny Women 2015. Golden Jester Finalist 2015.

New Comedian of the Year